"The Yeti is the spirit of the mountain. It's not too fast, but you don't want one to hit you." – Zyzyx, The Chasm Widens (Stratos)

The creature is obtained along with Fence and in campaign is received in Stratos' seventh mission. It shares its unit model with Netherfiend.

Yeti is named after cryptozoological creature.

Yetis are a race of semi-intelligent creatures indigenous to mountains. Their natural prey are the Frostwolves.

Most of Yeti's taunts are comprised of unintelligible moans.

Passive Ability: Frost Punch-- The yeti has a great chance to freeze the enemies.

The Yeti is actually not as slow as the Jabberrocky or the Ent, though it has no special ability or mana. Its freezing attack is similar to that of the Silverback except it requires no mana and only affects a single target, good at interrupting unshielded wizards or disrupting powerful land creatures or even flyers that get too close to the ground. 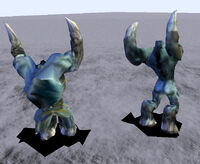 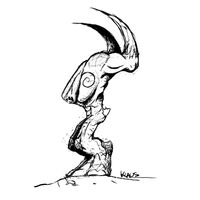 Concept art of a Yeti

Rendered model of a Yeti
Community content is available under CC-BY-SA unless otherwise noted.
Advertisement