Edit
watch 01:36
We're Getting Mutants in the MCU - The Loop
Do you like this video?
Play Sound
"Not all of my creations possess great intelligence. However, this is not a problem because one of the (many) qualities of my genius is the insight to make the most of what natural abilities a creature does have. For the longest time, the simple-minded "tick" was a hapless herbivore which rapidly sucked air through a series of chambers in its carapace to make a frightful din and scare predators away. Typical Persephone rot.
Calling it a "Vortick," I modified its thoraxial carapace to channel the air into a swirling vortex—much more powerful and minus the unpleasant sounds. (Allow me to digress briefly, for I believe you are wondering if this "vortex" has influenced the name of the vortick. An excellent deduction. I would have expected no less of you.) The vortex casts its victims into the air and subverts any attempts they might make to attack." – The Manual, The Book of Stratos

"The Vortick doesn't do much damage, but it can keep our enemies off balance." – Zyzyx, The Prophecy (Stratos)

The creature is obtained along with Air Shield and in campaign is received in Stratos' second mission. It shares its unit model with Scarab and Tickferno.

Vorticks are a species of insects who are descendants of the common Tick, serving Stratos.

As an insect, Vortick's taunts are mostly consisted of buzzing and droning.

Passive Abilities: Creates a vortex to lift enemy units into the air. This causes some initial damage, followed up by the damage caused by the subsequent dropping of the victims back to the ground.

Vortick aren't good for much, but they can render enemy wizards useless, and disable enemy creatures for a while. The Vortick's attack is one of the few things in the game that can interrupt a shielded wizard's spell. 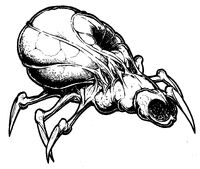 Concept art of a Vortick

Rendered model of a Vortick
Community content is available under CC-BY-SA unless otherwise noted.
Advertisement