Edit
"Feared for their destructive might and regenerative abilities--which render them nearly impervious to harm and less capable of understanding the pain others feel--Trolls can be both fearsome and savage. Indeed, of old, many of Our other followers warred against the Trolls and suffered from their raids. But one day, Athelas the Druid besought Us to grant them the gift of speech and thereafter taught them of Our name and instructed them in Our worship. Thus did the Trolls come to live in harmony with all the Faithful and become for us the bulwark of Our armies." – The Manual, The Book of Persephone

"Trolls are very tough and regenerate their health rapidly. But they're not very quick and they can't attack flying creatures." – Zyzyx, Balance of Power (Persephone)

The creature is obtained along with Grasping Vines and in campaign is received in Persephone's third mission. It shares its unit model with Firefist.

Trolls are named after a race of mythological creatures from Scandinavian mythology.

Trolls are a race of semi-intelligent humanoid creatures, known for their supernatural regenerative capabilities.

Before the story of Sacrifice, Trolls were a violent race who often raided other denizens of Elysium. Seeing this, Persephone granted them enough intelligence for them to be able to converse with her Druids, most notable among them Athelas, who taught them the ways of the Faithful. Since then, Trolls were traditional followers of Persephone. But even as such they still warred with other Faithful, most notably the Gnomes, leaving much hatred between those two races even up to the time of Sacrifice's campaign.

The trolls lived in relative peace, serving Persephone's armies as raw muscle, until a gnomish defector named Faestus offered Pyro to design a new Prole based on the Trolls. Pyro agreed and sent his forces to ransack Urghaz, home of the Trolls. There, they abducted many infants and made from them the Firefists. While it is unknown what exactly transpired there, the result of the attack were also the horribly deformed Mutants, possibly descendants of the surviving Trolls.

Passive Abilities: Trolls don't only regenerate while standing still, but also when moving.

Because of their slow movement speed, quick health regeneration, combined with the added benefits of being Guardianed, the troll is an excellent creature to guardian to a Manalith. 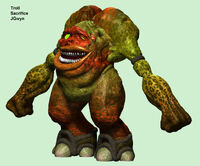 Rendered model of a Troll
Community content is available under CC-BY-SA unless otherwise noted.