Edit
"It is common knowledge that the Troggs are simple, cave-dwelling folk. It is also common knowledge that they don’t talk much and aren’t skilled at much but thumping other folks upside the head. This is one of them cases when common knowledge ain’t all it’s cracked up to be. It is true that the Troggs live underground and true that they ain’t much enamored of the common tongue, sticking when they can to their own babble. That means other folks don’t know what they say. That don’t mean they’ve got nothing smart to say. Below the earth, they build the most amazing altars and idols and such. They perform elaborate rituals which must account for their near immunity to spells. Let other folks think it’s cause they’re too dumb to know they oughta be hurt. You’ll know better. And so will they." – The Manual, The Book of James

"Troggs are always looking for a good fight. They love to fight against wizards, as they are immune to damage caused by spells." – Zyzyx, The Gods Themselves (James)

The creature is obtained along with Earthfling, Gargoyle and Rock and in campaign is received in James' first mission.

Troggs have their name derived from the word troglodyte, which means caveman.

Troggs are a humanoid race, known for their underground habitats, inability to speak cohesively and their immunity to most, if not all magic. They are one of the more pious followers of James. Since they have no specified home, they are presumed to be spread out all over the Glebe.

Even though their speech is highly incomprehensible, they have been known to utter small phrases. During the negotiations between Pyro and James, one Trogg said "Watch it!" upon being hit by a Firefist.

Groups of Troggs are great at attacking enemy wizards. Due to their high magic resistance, enemy wizards will have trouble killing them. They are particularly troublesome in groups, and killing them should be a top priority, as you can blast other enemy units away with magic.

However, because of the slow movement speed of the Troggs, you may want to ignore them completely, concentrate on the enemy instead, and decimate their stronger forces. If you control your Wizard's movement carefully and with good precision, along with careful watch of your Minimap, Troggs are easily countered by any any flying creature. If you find your wizard under the constant attacks of enemy Troggs, summon some of the Level 1 Flying Creatures, especially if you a Mystic of Persephone, or Elementalist of Stratos, as the rapid, stunning attacks of a Brainiac or Shrike will render the Melee creature defenseless, and the Trogg will have no way to attack the flyer. Level 1 Flyers are useful for taking care of Troggs because of their very short summoning time, and they only cost one soul.

Troggs also excel at destroying Manaliths, particularly in the beggining stages of Multiplayer games. Their rate of attack is the best out of all Level 1 Melee Creatures, and they can take more damage. The ridiculous magic resistance of the Troggs allows them to be quite resilient to a lot of damage, and that means the wizard will usually have to rely on his creatures to defend him from this unit.

Concept art of a Trogg 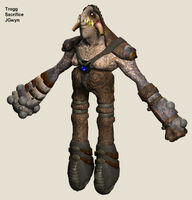 Rendered model of a Trogg
Community content is available under CC-BY-SA unless otherwise noted.