Edit
"My engineers tried several experiments trying to make a Tickferno that could shoot out a stream of flame, but the weak, little things kept setting themselves on fire. We had to settle for the current ones, which can blast a line of targets with a powerful heat ray that saps strength and wipes out energy. We’ve started a program of extermination, but they breed fast, so there are still plenty available if you can find a use for them." – The Manual, The Book of Pyro

The creature is obtained along with Fireform and in campaign is received in Pyro's second mission. It shares its unit model with Scarab and Vortick.

Tickfernos are a species of insects who are descendants of the common Tick, enslaved by Pyro.

As an insect, Tickferno's taunts are mostly consisted of buzzing and droning.

Surprisingly good unit, using half a dozen really takes its toll on the enemy. Use an equal number of these and snipers in your ranged division. 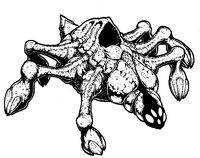 Concept art of a Tickferno

Rendered model of a Tickferno
Community content is available under CC-BY-SA unless otherwise noted.
Advertisement