ELDRED: I returned to the gods with new purpose...
MITHRAS: Stop, stop, STOP! I will hear no more until you tell something of substance about this Marduk. What do you know of him? Why does he seem to know you?
ELDRED: I was getting to that.

The Wanderer's Tale is the first interlude and the third cinematic in the game. You can either look at the brief summary or at the entire transcription of the cinematic along with a video of it.

Eldred retells his origins to Mithras and is interrupted by Zyzyx several times. He tells of the fall of Jhera and Eldred's own responsibility for its destructions.

After his emperor had died, Eldred was entrusted with the safekeeping of his empire. But due to much opposition to Eldred as the newly appointed ruler, his position was contested by many. Eldred, using his arcane knowledge, summoned the demon Marduk. But the demon wasn't interested in the achievement of Eldred's goals and abandoned him to wreak havoc on Jhera and ultimately destroy it.

Eldred was unable to put down that which he had brought up. 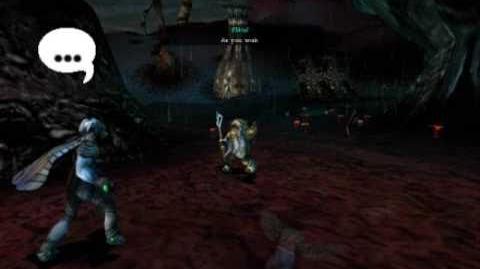 ELDRED: In Jhera, I had been a man of substance.
MITHRAS: A lord? Or perhaps a king?
ELDRED: A tyrant more like. You would have thought me an evil man.
ZYZYX: Most people did.
ELDRED: There were others. Some good, some bad, some indifferent. I vied with them for power.

(A part of the island falls)

MITHRAS: What was that? Perhaps it would be best if we set out.
ZYZYX: (Well) We were headed further south anyway.
MITHRAS: Please continue your tale; I will follow the sound of your voice.
ELDRED: (As you wish.)

(They walk away from the cliff and over a hill)

ELDRED: I had labored all my life to build another man's empire. When he died, too young, far too young, authority fell to me alone.
But I was not as well loved as he had been.
ZYZYX: Despised is more like it.
ELDRED: Foreign powers and internal conspirators plotted to tear the empire apart. My own people turned against me. After all I had done for them.
But their dull-witted prejudice would not destroy what I had labored so long to build.
Yet, the armies of my enemies grew too strong, and I was forced to turn to dark, dark forces.
MITHRAS: So... you summoned Marduk.
ELDRED: Aye, but the demon was too powerful. I could not control it.
MITHRAS: And then?
ELDRED: The rest I need hardly tell, for it is happening around us. It was the end of the world.

If you served Persephone, James or Stratos in the former mission, you continue onto the White Knight's intermission.

If you served either Pyro or Charnel in the former mission, you continue onto the Black Knight's intermission.