Edit
"There have always been tales of the elusive mountain nymphs—mystical creatures of immense beauty, finding comfort in the solitude of the high peaks of Empyrea. Many are the men who have died atop the frozen heights when seeking to catch a Sylph for a bride. As you would expect, there is some truth behind the tales that inspire such folly, but the secret of the Sylph is not where she hides, it is how she hides. For you see, a Sylph can remain unseen in plain sight so long as she does nothing to harm you. In battle, they are invaluable, appearing suddenly to loose a flight of arrows and then fading once more into the mist." – The Manual, The Book of Stratos

"The mysterious Sylphs can go invisible at will. They can’t attack while invisible, but that’s still a good way to sneak them in for an attack or away from a losing battle. Deadly accurate with their bows, they are best against flyers or using hit-and-run tactics." – Zyzyx, The Gods Themselves (Stratos)

The creature is obtained along with Frostwolf, Brainiac and Lightning and in campaign is received in Stratos' first mission. It shares its unit model with Ranger.

Sylphs are named after mythological creatures, elementals of air.

Sylphs are a humanoid race indigenous to Empyrea. All sylphs are female and are famous for both their beauty and hiding skills, which have inspired legends about them.

Special Ability: Stealth--Can make itself nearly invisible. When in this state, it cannot be targeted by spells or missile attacks, even if seen by the enemy. Must reappear when attacking.

Sylphs are best used against level 1 flying creatures and bombers. It is best to use them in a group of six as they might have a hard time hitting moving targets (depends on the direction the move in and their speed). 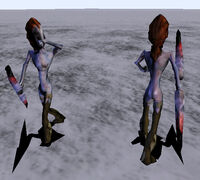 Concept art of a Sylph

Colored concept art of a Sylph 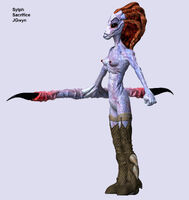 Rendered model of a Sylph 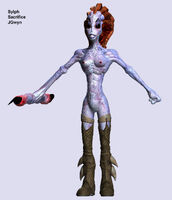 Rendered model of a Sylph

Fan art of a Sylph
Community content is available under CC-BY-SA unless otherwise noted.
Advertisement