"I am Stratos. God of Air and Supreme Lord of the Heavens. Bringer of Storms. Mover of the firmament. Ah, lets do be honest, shall we, in any halfway-civilized world, I would be the only god." — Stratos, The Gods Themselves (Intermission)

Stratos is the god of air. He rules the cold mountains of Empyrea. He values knowledge and cunningness. His followers are called Servants and his wizards are called Elementalists. His spellbook relies mostly on fast yet fragile creatures and powerful, low cooldown spells.

Stratos is highly intelligent and civilized. He believes himself to be better than the rest of the gods and wishes to rule the world alone.

Stratos is one of the last surviving gods in every campaign. He survives if Eldred chooses to serve him, and dies in every other god's ninth mission. In contrast, other gods may be slain as early as the sixth mission.

In every campaign, Stratos is the god who summons Marduk to the world. He plays the gods against each other, seeking to outlive them all.

He is voiced by Tim Curry. 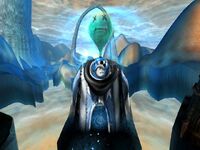 His statue in the Ethereal Realm
Community content is available under CC-BY-SA unless otherwise noted.
Advertisement