Edit
"In the elder days, before the hegemony of the five gods, great titans ruled the world. We obviously exterminated the great majority of them. It’s very difficult to get the undivided worship of a group of villagers when the Fire Giant up the road demands offerings in exchange for not burning the village down.
Of these titans, only the Storm Giants survive in any great numbers. Ever the diplomat, I was able to come to an accommodation with their leader, Lord Surtur, and to this day they wear these very handsome masks in tribute to me. In addition to being big and strong, they are especially useful to an Elementalist." – The Manual, The Book of Stratos

"Storm Giants are mighty, but when struck with lightning, they get even more powerful." – Zyzyx, Shadow of the Past (Stratos)

The creature is obtained along with Chain Lightning and in campaign is received in Stratos' fourth mission. It shares its unit model with Earth Ogre.

Storm Giants received their name from the mythological creature known as the giant and the word storm which amply describes their characteristics.

Storm Giants are the last known surviving race of titans. Unlike other titans who were wiped out by the gods, thus ending their interregnum after the death of the Creator, the Storm Giants, led by Lord Surtur, made a pact with Stratos to serve him in return for protection. As a token of this pact they wear masks resembling Stratos' face. They were given the isle of Surtur's Keep as their home.

Passive Abilities: A Storm Giant's passive abilities are activated via it's special ability, "Call Lightning." When struck by lightning, a Storm Giant gets enhanced statistics, despite taking some initial electric damage, this powering-up also causes the giant to spew lightning bolts in all directions. 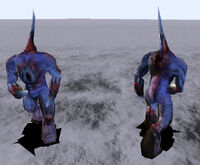 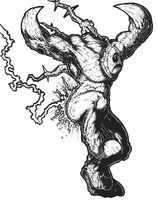 Concept art of a Storm Giant

Concept art of a Storm Giant 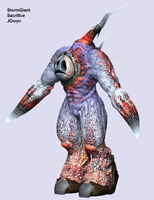 Rendered model of a Storm Giant

Rendered model of a Storm Giant
Community content is available under CC-BY-SA unless otherwise noted.
Advertisement