Edit
"Spitfires talk big, but they aren’t very tough. Don’t let them fool you. They can’t take much damage, and the cone of fire they project strikes a wide area but doesn’t do that much damage. So used one at a time, they aren’t all that effective. No, you fly a group of them in. Then all that fiery breath adds up and probably hits several enemies at once. Good stuff." – The Manual, The Book of Pyro

"Spitfires can’t take very much punishment, but in a group they can really dish it out. Ground attackers are helpless against them. Do be vary, however, of enemy ranged troops picking them off." – Zyzyx, The Gods Themselves (Pyro)

The creature is obtained along with Cog, Flame Minion and Fireball and in campaign is received in Pyro's first mission.

Jon Gwyn, a character modeler for Sacrifice, called Spitfire to be one of his favorite creatures.

Spitfire's name is derived from the word "spit-" and "-fire", amply describing its characteristics. Its source is the name of a British airplane. In the pre-release time it was called Fire Hosebat.

Spitfires are a race of avians, all traditional followers of Pyro. Nothing else is known about them, except that their were the best scouts out of the Proles. Due to their sharing their pre-release name with Shrikes, Spitfires could be descendants from them.

Spitfires are, like all the level-one flyers, pretty fragile and weak against ranged ground units. Instead of stunning/knocking down (abilities of Brainiacs/Shrikes) they, as the Gargoyles of James, do a decent amount of area damage. The difference between Gargoyles and Spitfires is in their stats - Spitfires have much less health, but do slightly more damage. And they also move faster. 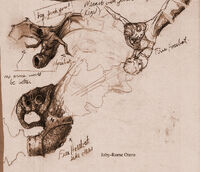 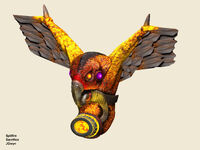 Rendered model of a Spitfire
Community content is available under CC-BY-SA unless otherwise noted.
Advertisement