"Empress Sorcha rules Pyroborea. She is a capable sorceress, but I've heard she can be overly cautious.
They say Buta has wooed her for many years without success. Hmm, maybe that's where her defensive talents came from, heh?" – Zyzyx, first time Sorcha is encountered

Sorcha (also mentioned in Scapex as Vanya) is Pyro's sorceress and the empress of Pyroborea. As a wizard, she is a defensive commander. She is also more compassionate than most of the other Pyro's Proles.

Search for a Better Future[]

Sorcha arrived in the world of Sacrifice at Pyro's urging to participate in the creation of a better world. She became Pyro's champion and the mundane leader of Pyroborea, having been crowned empress. At some point, she was even courted by Pyroborea's only known ambassador Buta. However, these days would not last and it would be some time after that she would be disheartened by Pyro's vision of a "bright new future".

The first mission, in the game, the Empress was sent to was a retaliatory attack on Surtur's Keep, following the invasion of Sere, which was, in terms of politics, a declaration of war by Stratos, an ally of Persephone with whom Pyro had already been at war. The whole ordeal was actually a trap set up by Stratos and proved to be a failure on Sorcha's part.

Seeing as how he needed an ally against his enemies, Pyro sent Sorcha (and possibly Eldred, if the player served Pyro) to Karn, to negotiate a treaty of alliance with James's champion Grakkus. The negotiations spiraled out of control, the fault of which falls either on the arrogance of Pyro's wizard leading the mission (in which case Sorcha abandoned the mission altogether) or on an incident caused by the uncontrollable Firefists, that were to be offered as a gift. Either way, Grakkus lost to the Proles of Pyro and Karn was overtaken. Sorcha then remained to oversee the transfer of Karn into the hands of Charnel, Pyro's new ally. The necromancer in charge of the transfer was the Ragman. Shortly after the initial invasion, James sent his Yeomen to reclaim Karn, which they did by both banishing the Empress and killing the Ragman.

Wavering of Faith and the Siege of Cindercrag[]

Afterwards, Sorcha was sent to raid the Glebe for slaves. This was the first time her faith in Pyro wavered and she deserted during a raid on Orgren. Pyro sent his forces to retrieve her sorceress and he pleaded with her to return, which she ultimately did. However, she would not escape disciplinary action for her desertion. She was sent to assist Charnel's Minions in hunting down the leader of the Cult of Ashur as a punishment.

Her defense of Pyrodraulic Dynamo™ in Cindercrag was limited, probably in part due to her hatred of the concept of slavery which fueled the infernal machine. She would only participate if the player served Stratos. In this case, the Empress would be required to defend Cindercrag against Charlotte due to most of Pyro's forces being stationed in nearby Ash to fend off an attack by Eldred.

The rest of her story depends on which god the player continued with. If the player continued with James, after the fall of Cindercrag, Pyro would find himself overwhelmed and cornered in his home of Helios with Sorcha as one of the defenders, although due to her wavering loyalty to Pyro she would never be seen commanding his ultimate altar, even though she might do it, if a force other than Eldred attacked Helios.

If the player continued with Persephone, Sorcha would be seen claiming one of Stygia's most strategic lands after the fall of the realm's patron god. There she would confront Eldred who had the intention of slaying the demonic hellmouths who had amassed there. Sorcha, disgusted by any unnecessary slaughter, even that of demons, would futilely try to prevent this. The next time she is seen is in Helios after Pyro tricked Eldred to meet with him, on Persephone's behalf, and ordered his champions to destroy him there. Pyro was destroyed instead.

If the player continued with Stratos, Sorcha would presumably be killed by Charnel's forces, lead by Acheron, alongside her patron god Pyro. The same would happen if the player served Charnel, only with Eldred leading the attack and the destruction being witnessed firsthand. Again, in none of those invasions was Sorcha given the privilege of defending Pyro's ultimate altar.

If the player continued with Pyro, however, Sorcha would very rarely be seen, completely sidelined by Eldred's victories. If the campaign would be finished with Stratos, she would probably die defending Pyro's ultimate altar in an invasion of Helios by Marduk's forces. However if the campaign was finished with Pyro, her final appearance would be in Thryhring, at the battle that would, if won, make Pyro the supreme ruler of the world of Sacrifice, having previously destroyed all of opposing gods (with any power left) except for Stratos, in whose home the battle was being fought. Having realized this, Sorcha, having already been disgusted by previous Pyro's atrocities, betrayed her god to serve Stratos. However, even assisted by Charnel's necromancer Acheron and the turncoat former-empress, Stratos would eventually succumb to Eldred's onslaught.

Sorcha is one of the rare characters whose fate is certain. She died in all of the possible invasions of Pyroborea's capital of Helios, having valiantly defended the god in which she had little faith and, if it never came to that, in the final act of her conscience, when she betrayed Pyro at the peak of his power, she was slain by the overwhelming forces of her former patron god. The irony of it all is that the one character to show revulsion in her god's villainy in the pursuit of power was the one that died in all of the possible scenarios.

Sorcha gets her name from the Gaelic given name "Sorcha" meaning bright or shining.

For all of the missions she participates in, she shares the same values as any wizard, but also has:

The only exception to these is Pyro's fourth mission in which she receives no bonuses, although her participation in that mission is rather limited.

Her color in every mission is always yellow, representing her patron god, Pyro. 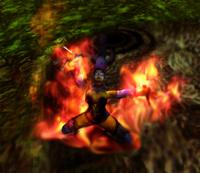