Silverback is Stratos' ultimate creature, and as such it is one of the five most powerful and most expensive creature types in the game. Like all Titans, it requires 5 souls and 1900 mana to be summoned.

The creature is received in campaign in Stratos' ninth mission. It has no entry in the manual, and is never directly described in the game.

Eric Flannum, the lead level designer for Sacrifice, had called Silverback the strongest creature in the game.

Almost nothing is known about Silverbacks, except for that they are traditional followers of Stratos.

The only times they are mentioned in the campaign are in the mission in which they are received and in Stratos' fourth mission, where you have an optional objective of collecting 24 souls and sending them to Stratos via a beacon. If you manage to do so, six Silverbacks will appear near your altar after a short time and will be yours to command. You cannot, however, allow them to be killed, which is unsurprisingly an easy objective. Most interesting, Stratos describes the Silverbacks as 'fruits of your labor', suggesting that the 24 souls you've collected were used to summon these creatures (which is incorrect, as each Silverback is worth 5 souls, and the total amount would be 30 instead of 24).

While flying, Silverbacks are the fastest creatures of them all, which can be increased even further by using their Run Away ability to significantly increase their speed for 10 seconds. This means that Silverbacks can be easily put to the right place at a right time, making them suitable for a more strategic approach of battle.

The most valuable asset at Silverbacks' disposal is their freezing breath. The damage they deal with their attacks is already formidable (not to mention that their attacks have a decent area of effect), and when augmented with their ability of freezing enemies, it makes Silverbacks one of the most well-rounded creatures in the game. An army composed entirely of Silverbacks is a simple, but very effective strategy (provided a wizard has enough souls to spare) - a strategy that would not work very well with armies made entirely of any other Titans.

Silverbacks also possess an innate ability to channel lightning, much like Storm Giants, although in a slightly different way. When struck by lightning, they don't receive damage bonuses, but they still begin to randomly cast lightning on closest targets, be that friend or foe. While useful in the middle of an enemy army, players should be wary of this ability, as multiple Silverbacks may result in shooting lightning at each other, continually activating their Static Field on among themselves, until their death.

The freezing effect is incredibly efficient when used for strategic effect, and it can be used for a variety of different tactics. A single Silverback can hold a mass of weak enemy units by freezing them for a significant time or even outrightly killing them, as is in case of most low-level flyers. Aside from being hurt directly, upon thawing previously frozen creatures also receive an amount of damage, which when combined with multitarget spells like Chain Lightning can bring end to massed enemy creatures in seconds. Silverbacks' freezing breath is also a bane of unshielded wizards, as it can disrupt their spellcasting and effectively rule them out of combat by perma-stunning them until they die. The same strategy applies when attacking more powerful enemy creatures - holding enemy hard-hitters for a while can turn the tide of combat in your favor. It does, however, require a fair amount of coordination in combat, as when two Silverbacks attack the same creature simultaneously, they are very likely to cancel each other's freeze effect, the damage still dealt though.

Silverbacks, like all other creatures, have their drawbacks. One of the most significant is the fact that they consume huge amounts of mana with each of their breath attacks, limiting their effectiveness in prolonged combat when they are without mana source. Their attacks, albeit having area of effect, have relatively short range, meaning that Silverbacks have to approach their targets first to successfully pull off the attacks. This, however, is not as large problem as it is in case of Dragons, thanks to Silverbacks' fast movement speed and Run Away ability. Also, although possessing Titans' impressive health and resistance statistics, Silverbacks are one of the two Level 9 creatures with the lowest health, the other being Phoenixes, meaning that they will easily fall under concentrated fire and offensive spells. Other than that, Silverbacks prove to be one of the most versatile units in the game.

Concept art of a Silverback 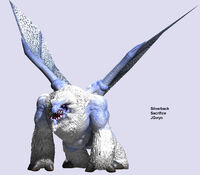 Rendered model of a Silverback 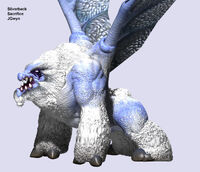 Rendered model of a Silverback

Fan art of a Silverback
Community content is available under CC-BY-SA unless otherwise noted.
Advertisement