Edit
"Among Our creatures, the most pure are the simple songbirds. The Shrike, 'tis true, is one of these, but its gift is neither so simple nor so harmless as would be expected of such a creature: The minions of darkness cannot bear the purity of the Shrike's song, which wounds them as surely as a Ranger's arrow. The druids, in seeing their fragile nature, have taught them the Lifeshield ability, which they can use to protect themselves from ranged damage." – The Manual, The Book of Persephone

"Shrikes have great control of their voices. In fact, they can emmit[sic] a shriek so high and with such precision that it will knock just about anyone to the ground. They are fragile though, so the druids taught them the secret of the Life Shield." – Zyzyx, The Gods Themselves (Persephone)

The creature is obtained along with Druid, Ranger and Wrath and in campaign is received in Persephone's first mission.

Shrike is named after a type of birds. In the pre-release time it was called Hosebat.

Shrikes are a race of birds known for their powerful shrieks. They are traditional followers of Persephone and several facts indicate their home is in Telluria (most prominent being their war cry).

The Shrike is a very useful creature: using its attack it can knock units to the ground. In masses, they can truly debilitate an enemy, hindering efforts to attack.

This is a particularly good creature for multiplayer games, as a low level Mystic can disrupt the enemy with Shrike attacks early in the game. The Shrike, like most level one flyers, has the downside of being frail, and being able to be killed and knocked out of the sky with any Basic Attack spell, and an easy target for ranged creatures.

However, another reason a low level Mystic may consider investing souls into making these creatures is because of the Shrike's special ability of Lifeshield, which makes the usually vulnerable Shrike more resilient to damage. Using Lifeshield, the enemy will have a more difficult time taking care of the Shrikes: unable to knock them out of the sky with a Basic Attack spell, a group of Shrikes can severely disrupt spells and summoning of creatures of a low level wizard with their stunning attack, and attacks of enemy creatures. This can be used to rush the enemy early in the game. Use sense however, you may want to spare some souls for other creatures, for example, a level 1 Mystic may use Shrikes to stun an enemy, while he sends Druids to wreck his manaliths. Always beware of ranged creatures when using massed Shrikes.

Later in the game, Shrikes still retain usefulness, as faster casting times and more soul resources become available. They are one of the only Faithful able to stun an enemy, and their low soul count and low mana cost makes them useful in stopping an opposing wizard's spells. 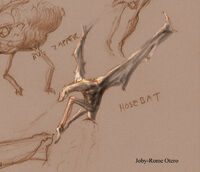 Concept art of a Shrike 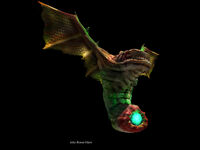 Rendered model of a Shrike
Community content is available under CC-BY-SA unless otherwise noted.
Advertisement