"There's Shakti. She came to this world not long before you did. Persephone reeled her in right off the bat." – Zyzyx, first time Shakti is encountered

Shakti is one of Persephone's wizards. Much like Eldred, she has only recently arrived in this world. Her training in Mysticism can be seen in the Tutorials when the player assumes her role to learn about Sacrifice.

Not much is known of Shakti before her arrival to the world of Sacrifice. After she arrived, though, she was immediately recruited by Persephone whose ideals Shakti quickly adopted. If the player (in the role of Shakti) slaughters a bunch of peasants during the first tutorial, Charnel offers Shakti to worship him instead of Persephone. But as Shakti's training continues she battles Persephone's enemies more and more until she is seen by all as a true follower of the Goddess.

Life of Wisdom and Justice[]

Shakti is seen first in Magmar helping Eldred defeat Buta (if Eldred consents to receiving help) and attacking Sere with Lady Abraxus (this time unsuccessfully). Later she's helping Eldred again, this time to defeat Acheron in Elmekia. Despite being a capable Mystic she is never given any assignments crucial to Elysium's cause, but rather only the missions of leading the Faithful during minor border skirmishes. Even during Persephone's darkest hours, she never orders Shakti to defend her capital of Idylliac, instead posting her to Elysium's penultimate stronghold of Arborea where she has her last battle, (if you played with Stratos, Pyro and possibly Persephone, if you betrayed her for Charnel), though it is possible the reason for this is that she was slain in Arborea in all campaigns, before she was required to defend Idylliac. Also by the time of Eldred's encounter with Marduk Shakti had already adopted Elmekia as her personal home.

Faithful to the End[]

Shakti is almost certain to have not survived the game. During Persephone's and James's final missions she is presumed to have perished alongside everyone serving Persephone in Marduk's onslaught of Elysium. During Stratos's and Pyro's attacks on Arborea she is actually seen dying before Eldred's eyes. Also if you betray Persephone for Charnel or just play with Charnel normally, you can hear a mission briefing from Stratos telling you that Stratos had slain Shakti in Arborea without Persephone knowing it.

Shakti received her name from a concept in Hinduism.

For all of the missions she participates in she shares the same values as any wizard, except for:

Her color in those missions is always green, representing her patron goddess, Persephone.

Encountered as Friend during[]

Encountered as Foe during[] 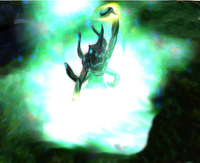 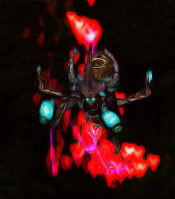