Edit
"Persephone does not talk about this (because it shames her and she’s got an unhealthy preoccupation with meaningless concepts such as honor), but those gremlins she uses as messengers are not really the complete species that she represents them as. You see, during the War of Purification (as the druid scholars call it—War of Persephone’s Tantrum might be more accurate), not all of her creatures bought into the whole "wisdom and justice of our crusade" blather she was trying to pawn off on them. A great number of her messengers used their embassies to other lands as an opportunity to defect. These are ancestors of the Seraphim who serve me now. Like their gremlin counterparts, they fly and are able to ensnare a single victim, pulling it toward them." – The Manual, The Book of Stratos

"The Seraph can ensnare enemies and pull them to her, she's also got a mean tail whip up close." – Zyzyx, Allegiance (Stratos)

The creature is obtained along with Soul Wind and in campaign is received in Stratos' fifth mission. It shares its unit model with Gremlin.

Seraph is named after an angelic creature. They all have female voices, but are still referred to gender-neutrally.

Seraphim are a sub-species of the Gremlins, more suited to Empyrea's cold climate. They separated themselves from their Faithful counterparts when they became disillusioned with Persephone's role in the War of Purification.

Special Ability: Cage Pull--Causes the Seraph to snare an enemy in a cage of pure energy. While ensnared, an enemy creature can be pulled towards the Seraph.

Concept art of a Seraph 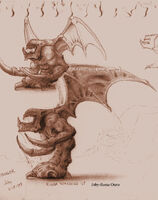 Concept art of a Seraph 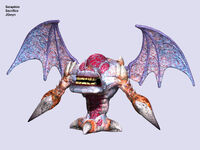 Rendered model of a Seraph
Community content is available under CC-BY-SA unless otherwise noted.