Edit
"In the depths of the forest are a great many creatures no outsider has ever seen. A few of these, such as the Scarab, are called forth when the need for them is great. Something like a spider but far larger, the mystical Scarab spins a web, but hers is not a web for catching prey, but a web of healing. Treat her well and she will serve you well." – The Manual, The Book of Persephone

"The scarab has the ability to heal others. Having one behind your creatures when they fight is a good idea." – Zyzyx, The Prophecy (Persephone)

The creature is obtained along with Ethereal Form and in campaign is received in Persephone's second mission. It shares its unit model with Vortick and Tickferno.

Jon Gwyn, a character modeler for Sacrifice, called Scarab to be one of his favorite creatures.

Scarabs are named after a family of beetles. Although Persephone mentions that all Scarabs are female, due to no other data on that they are referred to, as any other creature, with the pronoun "it".

Scarabs are a species of insects that are native to forests of Elysium and known for their webs that have healing properties. It is possible that the Scarab is related to the common Tick, due to its resemblance to other species descending from it.

As an insect, Scarab's taunts are mostly consisted of buzzing and droning.

Passive Abilities: Shoots a healing beam at your wounded creatures in order to heal them. Scarabs can not attack enemies.

The scarab isn't a very useful unit for most combat situations. Considering most of Persephone's Faithful have increased health regeneration, and just two levels later, you get the rainbow spell which can be used for healing groups of units quickly. It is also lacking in any offensive power or attack, the 2 souls and 600 mana required to summon it could be put to better use.

However, summoning a scarab allows you to concentrate less on the healing of your units, and conserve mana by not healing your units as much. This is not very reliable, however.

Something to keep in mind when using this unit is that when around an enemy manalith, it will sometimes fire its healing beam at it, causing no damage.

Scarabs are more useful when combined with other Gods' creatures, especially Charnel's minions which normally cannot heal out of combat. 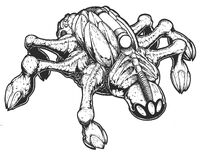 Concept art of a Scarab

Rendered model of a Scarab
Community content is available under CC-BY-SA unless otherwise noted.
Advertisement