As all Titans, Rhinok is the most expensive creature in the game, and is the most powerful unit in James' army. It has the same resistances as other Level 9 creatures, albeit it has the highest health among them.

The creature is received in campaign in James's ninth mission. It has no entry in the manual, and it is not described in the game.

Rhinoks source their name from the Greek word "rhis", which means nose. In some of the concept art they are also named Rhinocks.

Virtually nothing is known about Rhinoks, except for that they are traditional followers of James and that they can't speak.

Unlike other creatures of their level, Rhinoks don't have the ability to fly and, as all James' creatures, are comparatively slower then their counterparts of other gods. This, however, is compensated by Rhinoks' high resistance to damage and their health value, making them some of the toughest creatures in the game.

In addition, Rhinoks have a ground area attack that hits all enemies in a formidable radius around them and doesn't have friendly fire. Aside from its slow recharge rate, every such attack is powerful, as it can effectively deal with massed enemy ground units in seconds. Interestingly enough, Rhinoks' attacks can affect some flying units if they happen to be very close to the ground or knocked over on the ground.

Rhinoks possess an ability to surround themselves with floating rocks that shoot any nearby enemies, which is most useful for countering annoying enemy flyers that Rhinoks are unable to defend themselves from. The ability can also be used to add up to the overall damage dealt with their area attacks, easily finishing wounded and possibly fleeing enemy creatures, that Rhinoks might not be able to pursue.

The strategies regarding Rhinoks' usage are quite simple. As the toughest creatures in the game, they are well-suited for leading a frontal assault and absorbing the damage that would kill lesser creatures (although they need to be sped-up in order to make it to the front). A single Rhinok with constant healing source from a wizard can hold its own for quite a long time, enough for Rhinok to pull off its devastating ground attacks, provided it is not disrupted in process. Once Rhinoks enter the fray, they can easily dominate the ground part of a battlefield.

Rhinoks have some major drawbacks. One of them is their speed, meaning that wizards should keep speeding them up (which due to their enormous health lasts barely four seconds) or slow down the pace, for Rhinoks to keep up with the rest of the army. Secondly, players should pay attention to their creatures in the middle of a battle. While Rhinoks have the highest health value in the game, that health is not easily recovered - it takes 7 heal spell being cast to fully heal a close-to-death Rhinok. They are also vulnerable to poison, which combined with focused enemy damaging attacks and spells can bring Rhinoks down very quickly (an effective example is combining Deadeyes with Styxes or Abominations, which provides both the poison and an actual devastating damage).

Players should keep in mind that Rhinoks are pretty vulnerable to being stunned and their attack disrupted, which proves tiresome as their animation before striking an actual attack is quite long. A smart player with access to any of the disrupting abilities can effectively deny Rhinok a chance to attack, rendering it useless. There are many ways to knock Rhinok down - while casting stun spells is not very effective (because of creature's health, they will last only about a second), it is incredibly efficient to use a barrage of disrupting artillery projectiles or casting disrupting AoE spells for a one-shot stun. Their huge size seems to be reinforcing such tactic, as it makes Rhinoks much easier to hit than most other targets. As most such sources come from James' units and spells, players sending Rhinoks into the fight should be wary of their attacks and spells disrupting their own creatures. It is interesting to add that a Rhinok caught in a Wall of Spikes would be effectively perma-stunned and constantly damaged for the duration of the spell - the time between each spike attack is about of the same duration as the time needed for Rhinok to stand up from prone position.

Concept art of a Rhinok 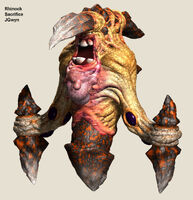 Rendered model of a Rhinok 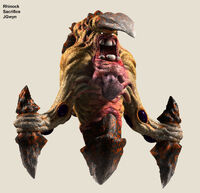 Rendered model of a Rhinok
Community content is available under CC-BY-SA unless otherwise noted.
Advertisement