ELDRED: Marduk finally began to make his presence felt more openly. Crude idols began to appear, and in the realm of the fallen god, the islands began to melt away...
MITHRAS: Hold, dear friend. I-I must rest awhile.

Respite is the second interlude and the fourth cinematic in the game. You can either look at the brief summary or at the entire transcription of the cinematic along with a video of it.

After momentarily disrupting Eldred's story, Mithras desires some rest. After they rest in the shadow of an idol to Ashur, the company continues south and Eldred asks Mithras some questions about Marduk and his intentions. Mithras reveals his cynicism towards the gods and blames them on everything that has transpired. He even goes as far as to try to justify the deaths of innocent. After that, Eldred continues his journey and his tale. 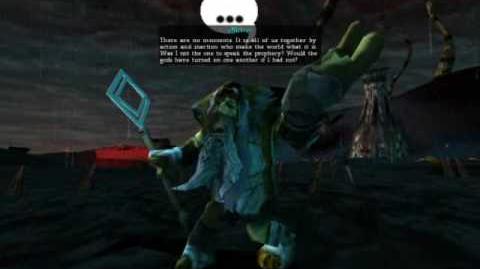 (A volcano starts to erupt, at all three companions distance themselves from it)
(They reach an idol to Ashur and stop)

MITHRAS: Ah, this feels like a shady spot.
ZYZYX: Oh, look at that.
ELDRED: Peace, Zyzyx. Let him rest.
(After they wait awhile)
MITHRAS: I am much refreshed. Lead on.

(They continue along the corpses as more of the island collapses)

ELDRED: Tell me true, Mithras, for there is a question which gnaws at me.
MITHRAS: Of course.
ELDRED: Do you believe Marduk was destined to come here? Or did he follow me?
MITHRAS: Hold yourself blameless. It is the gods here who have pre-destined their own destruction with intolerance and suspicion.
ELDRED: I concede they have not been reluctant to war on one another.
MITHRAS: You are too generous. If this world is consumed, it is because it was unworthy of surviving.
ELDRED: You surprise me. I know you have cause to resent the gods, but what of all the innocents who have suffered?
MITHRAS: There are no innocents. It is all of us together by action and inaction who make the world what it is. Was I not the one to speak the prophecy? Would the gods have turned on one another if I had not?
ELDRED: You cannot blame yourself for speaking the truth!
MITHRAS: The truth? The truth is we are doomed to repeat our mistakes time and time again. It is the world's only constant.
ELDRED: No.
MITHRAS: Forgive my melancholy. Weariness has weighted down my spirit. Please continue your tale.
ELDRED: As you wish.

If you served Persephone in the last mission, continue onto her intermission.

If you served James in the last mission, continue onto his intermission.

If you served Stratos in the last mission, continue onto his intermission.

If you served Pyro in the last mission, continue onto his intermission.

If you served Charnel in the last mission, continue onto his intermission.