Edit
"Recruited from among the Fyllid, the Ranger holds sway over the darker heart of the forest. Using a bow skillfully crafted from the precious trees of the Daven Forest, each Ranger strives to attain perfection as a hunter and as a warrior, for they have taken as their creed the most martial aspects of Our teaching, and do not shrink from the tireless pursuit of personal greatness.
Of their arts, none is more unique than their mastery of tracking. At your direction, a Ranger will scry the location of the nearest enemy. Using a group of Rangers, you will find you can uncover the hiding places of all your rivals." – The Manual, The Book of Persephone

"Rangers are adept hunters and trackers. They excel at knocking flyers out of the sky with the long range of their bows. They have also developed mystical Scrying powers to help track their enemies." – Zyzyx, The Gods Themselves (Persephone)

The creature is obtained along with Druid, Shrike and Wrath and in campaign is received in Persephone's first mission. It shares its unit model with Sylph.

Rangers are named after a profession of people who are specially trained to traverse rough terrain.

Rangers are members of the Fyllid race with their home in the Daven Forest. They are traditional and exclusive followers of Persephone. Unlike the Druids, they are more adept at scouting and hunting, using bow and arrows against their enemies.

Special Ability: Divine Sight - Shows where enemy units are located, even when they are hidden or far in the distance. 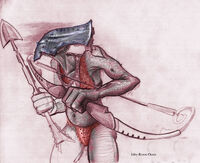 Early concept art of a Ranger

Concept art of a Ranger 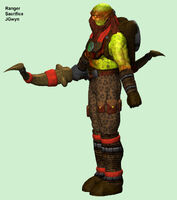 Rendered model of a Ranger 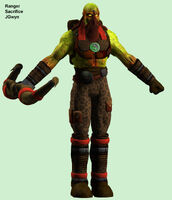 Rendered model of a Ranger
Community content is available under CC-BY-SA unless otherwise noted.
Advertisement