Edit
"It is difficult to believe any self-respecting gnome would worship Persephone. They claim to have an interest in building and inventing things, but there they are making sacrifices to the Goddess of Antiquities. It can only be that they’re afraid. By staying in those rustic environs, they ensure that they know more than everyone else about the only kinds of things that matter: things. Well, don’t despair. There are some who show more sense than that. They are very devoted to my cause, even abandoning their old, trusty handcannons to arm themselves with rocket launchers. They are so enthusiastic about Pyro’s principles, they call themselves Pyromaniacs." – The Manual, The Book of Pyro

"Faestus had converted many gnomes to "Pyromania." They've even made these rocket launchers that set people on fire. Trying to impress Pyro, I guess." – Zyzyx, Shadow of the Past (Pyro)

The creature is obtained along with Dragonfire and in campaign is received in Pyro's fourth mission. It shares its unit model with Gnome and Deadeye.

Pyromaniacs are named after a psychological disorder.

Pyromaniacs are a relatively new sub-species of Gnomes who rejected Persephone as their patron god, instead worshipping Pyro and embracing the teachings of Pyromania.

Although they have no specified home, their inventions were tested on the isle of Cindercrag, where they made their base in Pyroborea.

The most prominent Pyromaniac known is Faestus, founder of Pyromania and Pyro's most renown inventor.

Passive Abilities: Fires rockets, that upon impact on enemy, ignite the unit on fire. While burning, enemy units lose health at a significant rate.

Pyromaniacs are one of the few creatures those are capable of killing a wizard very easily. So it's a good idea to target the enemy wizard with them as much as possible. 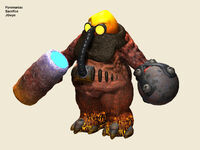 Rendered model of a {{PAGENAME}}
Community content is available under CC-BY-SA unless otherwise noted.