Edit
"Don’t think that the proles can do nothing but set the enemy on fire. As important as this is, Pyro does recognize the need for diversity. Hence, the Pyrodactyl, which can swoop in on your foes and spray them with a coat of oil. This oil often blinds its victims temporarily, but, most importantly, it makes them even more susceptible to being set on fire." – The Manual, The Book of Pyro

"The Pyrodactyl covers its victims with oil, blinding them and making them burn really bad." – Zyzyx, Allegiance (Pyro)

The creature is obtained along with Explosion and in campaign is received in Pyro's fifth mission.

Pyrodactyl receives its name from a Jurassic avian and the common prefix for most Proles pyro-, meaning fire.

Pyrodactyls are a race of avians serving Pyro as Proles. It is unknown if they are a product of Pyro's factories or anything else about them and their origin.

Most of Pyrodactyl's taunts comprise of unintelligible groans and wheezing, the great majority of them violent.

The Pyrodactyl sees use for two different purposes: destroying Manaliths or carelessly placed artillery and casting Viscous Oil. Due to the Pyrodactyl's high costs and frailness plus the usefulness of Viscous Oil, the last option is usually preferable.

Special Ability: Viscous Oil--This attack drops a blob of oil that blinds enemy units and makes them more susceptible to fire based attacks. Blinded units will lose their given orders, and will remain useless until the blindness passes.

Viscous Oil is an incredible efficent way to both hinder you enemies actions by blinding them and increasing your damage output while, affecting multiple targets at once without forcing your Pyrodactyl to move too close to the enemy. Often a well-placed shot of oil combined with an AoE-spell like Explosion or Rain of Fire can bring down an enemy army to a point where your troops can wipe them out rather quickly without giving your opponent the possibility to show proper resistance.

It should be reminded though that the blindness vanishes quicker than your wizard can cast most spells. In order to ensure that your spell doesn't get interrupted or dodged, it's sometimes smart to start casting a spell and meanwhile using Viscous Oil to prevent an enemy retreat. This can be performed especially easy when you're attacking an important enemy Manalith, causing the enemy wizard to teleport in with his army to defend his structure just to get blinded and hit by a powerful spell.

Even when you're currently uncapable of combining Viscous Oil with casting strong spells (e.g. lack of mana, cooldowns), it's still useful to boost the damage of most ranged units Pyro offers, especially Bombards that also do area damage, or Warmongers that otherwisely would have trouble to get the first strike on the enemy.

Be aware though: Viscous Oil can also affect your units when they are close to the target area, and they will suffer the same penalties as enemy units, so keep your meelee-troops away from the enemy before using Viscous Oil (especially your Pyrodactyls), except you want to lose them to your own Bombards (which can be the case when you decide that your Cogs are only good for Steaming Death anymore). 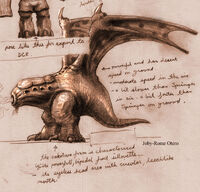 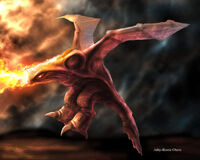 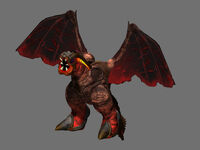 Rendered model of a Pyrodactyl 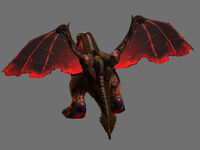 Rendered model of a Pyrodactyl
Community content is available under CC-BY-SA unless otherwise noted.
Advertisement