"I am Pyro. God of Fire. They will tell you I am God of Destruction and Chaos, but that's not really true. I am the spark of imagination and the engine of industry. I am the bringer of knowledge and the bearer of light." – Pyro, The Gods Themselves (Intermission)

Pyro is the god of fire. He controls the fiery islands of Pyroborea. Ideals for his servants, the Proles, are ingenuity and obedience. His wizards are called Sorcerers. His spellbook relies mostly on highly damaging yet fragile creatures and spells which deal large amounts of area-of-effect damage. Both creatures and spells often set their targets alight, doing damage over time. 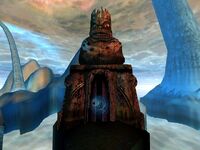 His statue in the Ethereal Realm
Add a photo to this gallery
Retrieved from "https://sacrifice-shiny.fandom.com/wiki/Pyro?oldid=9963"
Community content is available under CC-BY-SA unless otherwise noted.