Phoenix is Pyro's ultimate creature, and, as all Titans, it is one of the most powerful and most expensive units in the game. Although having less health than most of its counterparts, it is able both to deal great amount of damage with is attacks and to drain its targets from mana, all of it from a formidable range.

The creature is received in campaign in Pyro's ninth mission. It has no description in the manual and is not described in the game.

"He has rows of paddle like wings on each side of a legless hornet type body, with the Chinese New Year dragon as a head and the garish color. He's animated brilliantly with his wings doing a sine wave as he floats above the ground. He's really awesome and big." – Jon Gwyn, an interview on creature designs

Phoenixes are named after a type of mythological avians. In pre-release time it was known as the Dragonfry. This was probably a fire-based pun on the name of the insect dragonfly, which looks very much alike to Phoenixes. Also during the credits, they are used as an avatar of the game designer David Msika.

Almost nothing is known about Phoenixes, except for that they are traditional followers of Pyro. The stand out considerably in Pyro's arsenal of infernal mechanically advanced creatures by their remarkable natural appearance.

The only times they are mentioned in the campaign are in the mission in which they are received and in Persephone's third mission, when Eldred is sent to Magmar to confront Ambassador Buta, with Shakti supporting him in battle. The player has an option to either agree with the goddess and accept Shakti's assistance, or renounce the offer and confront Buta alone. Should player choose the first option, Buta can be seen asking his lord for help. Soon thereafter, two Phoenixes appear near Buta's altar and join his ranks.

Since Phoenixes have no specified home, they are presumed to be spread out all over Pyroborea.

Although inspired by and sharing the appearance of a dragonfly, Phoenixes are far from being helpless little insects. As all Pyro creatures, they deal tremendous amount of damage with their attacks. Once their beam hits and the target is not killed outrightly, it is heavily drained from mana (mimicking Tickferno's ability), which is especially handy when used against enemy wizards or creatures that heavily rely on constant mana source, such as the higher-level range units. It is worth mentioning that Phoenixes' beam attacks have the longest range among all Titans, and as such they can rival with many dedicated ranged creatures (like Snipers or basic shooters). However, their attacks are easily avoidable due to the slow speed of attack and high concentration of the beam they fire.

Phoenixes have an innate ability to surround themselves with a fiery aura that is similar in function to the Fireform spell. The ability does not cost any mana points and is constantly passively in use, only to be activated immediately when Phoenixes are in a certain range from enemy units (the radius is slightly wider than their melee range), continuously damaging the adversaries for as long as they remain in the range. If Phoenixes happen to be floating very close to the ground, their Immolation Aura can affect also enemy ground units (and considering the Phoenixes' size, it can affect quite a wide area).

It is worth noting that Phoenixes always fly - they never stand on the ground, neither can they be forced to, apart from Freeze effect, which may cause them to land for a duration of spell, but they quickly become airborne again.

Phoenixes are possibly the best 'anti-mages' in the game. The asset of rapidly dropping target's mana value is invaluable when it comes to greatly weakening enemy wizard's efficiency. Aside from the draining effect, their attacks deal a great amount of damage, and it takes two to five such attacks, depending on active shield spells and the opposing wizard's level, to effectively finish-off a wizard. It should be noted that, although having powerful impact effects and impressive range, the Phoenixes' attacks are average in terms of accuracy and have no area effect whatsoever. Considering that they statistically miss around one time in three attacks and that their beam takes some time to 'travel' to actual target, human enemies can learn to easily dodge most of the attacks by effectively moving out of harm's way at the last moment.

Apart from the mana drain ability, Phoenixes have a very high damage potential. With their long attack range, they can function in a similar manner to snipers, and they fare very well when tasked with eliminating key enemy units. In a one-vs-one combat, they can beat all Titans except from Dragons. Effectiveness of their attacks increases with the size of their targets, and as such Phoenixes are also good at dealing with enemy Manaliths and Shrines. As their attacks hit only one target at a time and have quite long recharge rate and average accuracy, Phoenixes should not be sent unsupported against massed enemy units or wizards, as they will very likely die, either from the enemy's onslaught or a soul stealing spell respectively, before actually dealing much damage.

Aside from being vulnerable to masses of weak enemy units, Phoenixes are also one of the two Titan units that have the lowest health among their type (the other one being Silverbacks). Unlike Stratos' Titans, Phoenixes have less problem in staying alive in the midst of combat, as they can shoot their beams from a much longer range. If the player can provide an army with a meat shield to act as a front-line units to cover the weaker units (Firefists work well in such a role), Phoenixes can prove to be more than difficult to get rid of as they can attack from a safer distance. It is necessary to add that, just like most Titans, Phoenixes consume a large amount of mana with their attack, so providing them with a constant mana source is important. 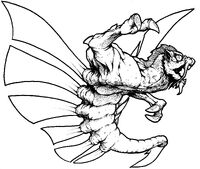 Concept art of a Phoenix 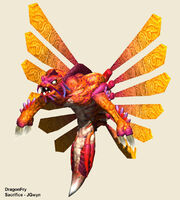 Rendered model of a Phoenix

Rendered model of a Phoenix
Community content is available under CC-BY-SA unless otherwise noted.
Advertisement