"We are Persephone. We are the essence of life. You have seen Us in the sweet virgin, the gentle mother, and the wise crone. Love Us, and we shall requite thy love a hundred-fold." – Persephone, The Gods Themselves (Intermission)

Persephone is the goddess of life. She rules over the luscious green lands of Elysium. Her ideals for her followers, the Faithful, are wisdom and justice. Her wizards are called Mystics. Her spellbook relies mostly on healing spells and creatures that regenerate fast.

Persephone has a strong, presupposed alliance with James and a strained one with Stratos. Unlike James, she is eager to wage war for her ideals and press points of contention until they are solved and appears to be in the midst of an ideological war with Pyro as the story begins. Mithras considers her to be one of the two most extreme and contentious gods, along with Charnel. She takes in Shakti, a novice wizard, shortly before the arrival of Eldred. Yogo has remained her champion for a very long time.

Despite her belligerent zeal, to her opponents, Persephone first offers her opponents a final opportunity to submit. Mystic Eldred staunchly represents this ideal in his dialogue. Upon discovery of the Mutants, she takes pity on them and immediately inducts them into her service.

Persephone is conclusively slain in three of the five possible conclusions. Persephone will not re-establish contact with Mystic Eldred after the ninth mission, and is not mentioned after the ninth intermission for Geomancer Eldred. It is possible that Persephone was critically injured during the events of the ninth missions and unable to take action against Marduk, but due to Eldred's delayed acknowledgement of her absence in The End Days (Persephone) and Acheron's apparent death under similar circumstances in The End Days (Pyro), it is unclear exactly what her fate is in either case. 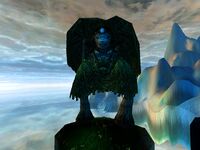 Her statue in the Ethereal Realm
Community content is available under CC-BY-SA unless otherwise noted.