Edit
watch 01:36
We're Getting Mutants in the MCU - The Loop
Do you like this video?
Play Sound
"Oh yes, the demonic Netherfiend. Since the Demon Gate of Golgotha has been declared off-limits to any god, there are fewer of them around these days. Those few who are in my service are delightful creatures capable of defeating most foes quite easily in single combat. Netherfiends are mighty creatures comprised of taut muscle and sinew, and their hunger for souls is even more exquisite. Each soul that they devour adds to their strength, their ferocity and... lethal beauty." – The Manual, The Book of Charnel

"A netherfiend is very powerful as is, but it can become even stronger by consuming blue souls." – Zyzyx, Shadow of the Past (Charnel)

The creature is obtained along with Animate Dead and in campaign is received in Charnel's fourth mission. It shares its unit model with Yeti.

Netherfiend's name is derived from the word "nether-" and "-fiend", amply describing its characteristics.

Netherfiends are a race of demons, and came to this world through the Demon Gate of Golgotha. Until its reopening, during the final war between the gods, the population of Netherfiends was endangered as no new source to their biological circles existed without the Demon Gate. Like all demons, they are known for their hunger for souls.

Since they have no specified home in the world of Sacrifice, they are presumed to be spread out all over Stygia.

Most of Netherfiend's taunts comprise rumblings and moans. They can in fact talk, but they do so rarely.

Devour--The Netherfiend is able to consume a blue soul. Doing so will increase its attack power and resistance to damage.

Their Devour ability makes Netherfiends extremely useful in certain situations. They can be used for very dangerous operations where even titans can die easily, like destroying hard to destroy objects: heavy guardianed manaliths, Pyrodraulic Dynamo, Magnifryers, or eliminating even huge groups of enemy snipers and artillery units.

This technique however can be expensive, as making Netherfiend a really tough unit requires making it consume large number of souls. 20 souls will make it very resistant, but it can still be too weak to destroy some of mentioned above. 30 of them will make it almost indestructible. Keep in mind however, that no matter how many souls a demon will consume, he will still remain a relatively slow unit.

If an upgraded Netherfiend dies, it always can be revived with Animate Dead and retain its stats. 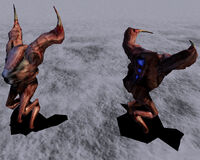 Concept art of a Netherfiend 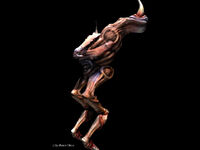 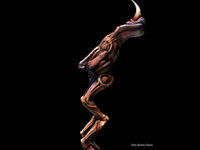 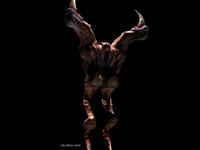 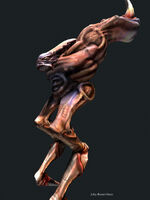 Rendered model of a Netherfiend
Community content is available under CC-BY-SA unless otherwise noted.
Advertisement