"Not only does the Jabberocky stomp its opponents, it can stomp on the ground and cause a little earthquake." – Zyzyx, The Chasm Widens (James)

The creature is obtained along with Bombardment and in campaign is received in James' seventh mission. It shares its unit model with Ent and Wrecktangle.

Jabberrocky is named after a poem.

Most of Jabberrocky's taunts are comprised of unintelligible moans and trumpeting sounds. It does however occasionally pronounce e.g. "right away".

Jabberockies are slow, hard-hitters with a considerable pool of health. Their high health is both a blesing, making them hard to take down, and a curse, making them also considerably more difficult to heal than ents (as is often the case with James' creatures). They possess the largest melee damage output of all of James' creatures, and second largest pool of health.

Special Ability: Earthquake - After a long channel, stuns and damages nearby enemies around the creature. 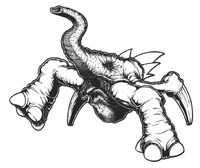 Concept art of a Jabberrocky 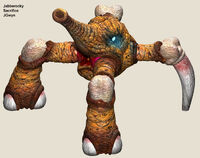 Rendered model of a Jabberrocky
Community content is available under CC-BY-SA unless otherwise noted.
Advertisement