Edit
"You’ve heard me say that I like the world the way it is. That don’t mean I got a problem with folks what got the spirit of invention. Good ole honest ingenuity is something to be used, if it’s what comes natural to you. Just ask the inventor of the Ikarus. He took some fellows, strapped wings on their arms and taught them to fly.
Nowadays we got a whole society of fellows with homemade wings. They gotta carry lots of glue on ‘em, in case them flappers start coming apart, so they’ve gotten good at dropping this glue on enemies and mucking up their movement. But when it gets down to a brawl, it ain’t about tricks up their wings. They like to get right in there with the fisticuffs, where they put their upper body strength to good use. Yep, folks used to laugh about my flying men. Not no more. Not one bit." – The Manual, The Book of James

"Even with those wings on his arms, the Ikarus packs a pretty good punch." – Zyzyx, Allegiance (James)

The creature is obtained along with Halo of Earth and in campaign is received in James' fifth mission.

"That guy is just so funny looking, and moves in the most amazing way. Jon and Manjit (modeller/animator) both outdid themselves on this character." – Martin Brownlow, an interview about creature designs

Ikarus is named after Icarus, a Greek mythological figure. In the pre-release time, it used to be known as Ickarus. Both Eric Flannum and Martin Brownlow had named Ikarus their favorite creature due to its comical appearance. They look as slightly obese men with large noses and wings strapped to their arms. They use their fists to attack their foes and their voices are extremely accented, with a British accent that most likely imitates RAF airmen.

Ikaruses are a humanoid species, most famous for their use of artificial wings to propel themselves from the ground and fly. What started as a mere technological innovation, resulted in the creation of an entire society of people. The glue they use to attach their wings to their bodies, is also used as a projectile against their foes.

The most prominent Ikarus known is Gammel.

Most durable, yet slowest bomber. It's worth mentioning that the Ikarus is the only bomber that even survives a direct Lightning hit.

While Stickbomb might not be the best ability among the bombers, it's helpful to reduce the mobility of stronger enemy units, such as tanks or other bombers that try to raid your Manaliths, or even to punish an enemy wizard for not having his shield active.

Special Ability: Stickbomb--Slows down enemy units down with thick glue.

Concept art of an Ikarus 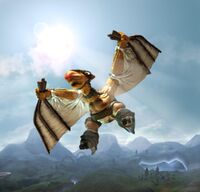 Rendered model of an Ikarus, in an environmental setting 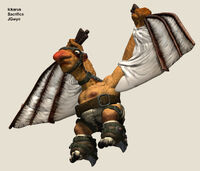 Rendered model of an Ikarus

Rendered model of an Ikarus

Gammel, the most prominent Ikarus known
Community content is available under CC-BY-SA unless otherwise noted.
Advertisement