Hellmouth is Charnel's ultimate creature, and shares most of the statistics with other Titans. It costs 1900 mana and 5 souls to summon the creature. While expected to be the most powerful unit in Charnel's arsenal, Hellmouths require a very strategic gameplay and a fair coordination with other units in order to be used properly, as they are arguably the weakest level 9 creature type in the game.

The creature is received in campaign in Charnel's ninth mission, and it has no dedicated entry in the manual.

Hellmouth receives its name after a portal between earth and hell from the TV series Buffy the Vampire Slayer. This in return received its name from a medieval concept of a gateway to hell.

This presumption is substantiated by the fact that one of Hellmouth's quotes is from Buffy.

Along with netherfiends, hellmouths are a species of demons. As such, they are not indigenous to the world of Sacrifice, but rather are from one of the demon realms that can only be reached via the Demon Gate. Also as they are demons, the only god that would consider associating with them is Charnel.

Since they have no specified home, they are presumed to be spread out all over Stygia. They however, have been known to gather at the Crossroads of Abaddon.

Hellmouths are somehow mediocre when comparing their statistics with other Titans. They have a medium health value for a creature of its level and possess the lowest damage output among its counterpart. It is worth mentioning, however, both matters can be solved, as Hellmouths have some important features regarding these statistics. The creatures can tremendously improve both their health and resistances by consuming blue souls. Their attacks, although having a short range, almost never miss and they expose targets to the effect of poison, lowering enemies' resistances in addition to dealing damage.

As all Charnel's minions, Hellmouths do not regenerate when standing still, but they drain a fair amount of health from the enemies each time they attack. As such, when adding their ability to poison enemies, Hellmouths do their best when assuming a 'tanking' role, flying right into a fray to weaken enemies and to absorb damage that would otherwise affect weaker creatures.

A valuable asset at Hellmouth's disposal is its ability to consume friendly souls. Although this may result in player losing the valuable souls and leaving him outnumbered, feeding a Hellmouth with additional souls greatly improves their survivability. A Hellmouth fed with circa 5 additional souls is extremely hard to kill even for a group of Warmongers, considering the fact that it also drains the enemies' health. Due to the increased resistances gained through Devour, perhaps the best option (outside of soul-stealing spells) to counter the nearly-immortal demon is to counter it with poison, as creatures with lowered resistances go down pretty quickly.

It is worth noting that, regardless of the souls consumed, Hellmouths' corpses always provide 5 souls. This basically means that the souls used to empower the demon are gone forever, and players should be wary of it as Hellmouths cannot win a battle just by themselves. However, resurrected Hellmouths keep the increased statistics they gained through feeding on friendly souls, so constantly animating the demons can be a pain in the neck for its opponents.

Due to their flying ability, swift movement and a fair toughness, Hellmouths can be sent by the player as scouts early on in the game without the need to worry that they would die along the path. Unlike the Bombers, they do not work well in guerrilla tactics, because of their low damage output. The damage they deal affects the target for a certain amount of time, so Hellmouths will have a great difficulty when tasked with destroying lone enemy Manaliths - the prolonged damage they deal is easily recovered due to structures' fast regeneration rate.

In combat, the demons are fairly weak on themselves, and players should strongly consider if summoning them is a necessity. Hellmouths require a strong damage support from allied creatures and player's wizard, and as the demons consume a lot of souls, players should think twice if the effort is really worth it.

As mentioned earlier, Hellmouths fed with one or two souls are just enough to allow them to act as front-line 'tanks'. However, players should still be wary of soul stealing spells that can dispatch then with ease. Draining life from enemies is a valuable asset, but it should be noted that Hellmouths' attacks consume a fair amount of mana, thus forcing players to provide them with a constant mana source (which is quite difficult to achieve when Hellmouths are in the middle of the fray due to their limited attack range, and sending Manahoars to follow them is most commonly a certain death sentence for them). Even if the Hellmouth dies in the middle of a combat, Necromancers should not worry about spending another 1900 mana to summon another (as would other wizards when their precious Titan falls) as they possess the invaluable spell that can quickly bring the demons back to fight.

When used offensively, players should make use of Hellmouth's ability to poison and send them to affect key enemy units so that allied damage-dealers can easily finish them off. Hellmouths are very efficient when supported by a group of Abominations and Styxes, as both unit types deal heavy area damage but are vulnerable to enemy counterattack - a problem that can be solved by covering them with Hellmouths to absorb enemy fire (which is easily achieved due to their massive collision boxes). Stacking Hellmouths poison with another source of it (like Deadeyes or the Plague spell) is also a good tactic, especially when facing a small army composed of highly-resistant units. As is always the case with weakening enemies with poison, releasing Demonic Rift at the right time can finish the opponents off and easily turn the tide of battle in the Necromancer's favor. 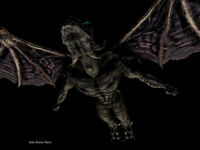 Rendered model of a Hellmouth 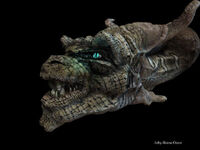 Rendered model of a Hellmouth's head

An early rendered model of a Hellmouth, shown breathing fire
Community content is available under CC-BY-SA unless otherwise noted.
Advertisement