Edit
"The Guardian spell forms a symbiotic link between the Manalith and any creature chosen to be its guardian. After casting the spell, a beam of red energy will bind the creature to the Manalith. The tethered creature will only be able to travel in the immediate vicinity of the structure, but in return will be granted enhanced statistics such as enhanced missile and magic defense, better health and mana regeneration, and more powerful attacks. Guardians are not invincible, and are very susceptible to melee attacks." – The Manual

Guardian is every god's level 1 spell.

"A Manalith being guarded will have enhanced defenses. If the building itself takes damage, the damage will be distributed amongst all of the creatures connected to it. All guardian creatures must be killed off before the Manalith can be destroyed. In all, it’s a very powerful spell, and if used properly it can turn the tide of battle." – Manual

The spell is received along with other level 1 spells and in the campaign is received in the first mission.

A lone guardian receives 75% damage reduction and strong regeneration bonuses, but those are reduced for each additional guardian linked to the manalith. Having more that 4 guardian creatures increases durability of a manalith very slightly.

Also, do note that this spell cannot be cast upon any hero creatures.

The Guardian spell is very useful for defending a single manalith; however, cast the spell sparingly, as it can quickly thin out your army. It is a good idea to use only a few creatures this way, and only on critical manaliths.

In singleplayer, guardianing snipers or artillery units is usually the best idea. These creatures are capable of dealing massive damage to enemy's army, and can overcome superior numbers.

In multiplayer, however, where warfare is more mobile, manaliths are more critical and the enemies have numerous strategies to bring down even a manalith guarded by numerous artillery units, Guardianing ranged creatures is not as popular. Usually, a single brawler or bomber is guardianed to manaliths of great importance; this aids the survival of the manalith, which is most important in multiplayer. (More specifically, the guardian will allow the manalith to survive long enough for your wizard to teleport back to it and save it. Trolls work very well for this, as they are incredibly durable as a guardian.)

If you find yourself having to fight numerous Guardianed creatures, there are a couple of strategies you can use. If the enemies are ranged creatures, use their physical weakness to overcome them; send sped-up bombers to attack the manalith (not the creatures themselves, as pathing issues will make this difficult). If even a few reach the manalith, the guardians will fall very quickly. On the other hand, if several tough melee units are guardianed to the manalith, try to avoid fighting them; they can't hurt you, nor can they exert power on the rest of the map. Either way, the fastest way to wipe out many guardians is to use destructive rain or ultimate spells. 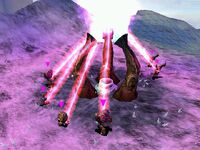 A Charnel manalith guardianed by half a dozen creatures
Community content is available under CC-BY-SA unless otherwise noted.
Advertisement