Edit
"It is clear to you, no doubt, that We seek out righteous souls from other worlds to serve us as Mystics. It is even so that you have been taken into Our presence. Long ago, We brought an entire race--the Gnomes--from another world. Such a thing is not often to be done, for the balances of nature must be respected, and even now there are times the crafty tinkers do test the limits of Our infinite mercy. Yet they are dear to Us, though not born of Us, and serve well in Our armies. They wield mighty Hand Cannons of their own invention, which, though slow firing, are very powerful, and make these otherwise timid creatures quite effective at defending Our justice." – The Manual, The Book of Persephone

"Gnomes are pretty good with those hand cannons of theirs. I'm glad not all of them went with Faestus to join Pyro." – Zyzyx, Shadow of the Past (Persephone)

The creature is obtained along with Rainbow and in campaign is received in Persephone's fourth mission. It shares its unit model with Pyromaniac and Deadeye.

Gnome is named after a legendary creature.

Gnomes are one of the rare races whose ancestry does not belong to the world of Sacrifice. In Elysium they have adopted Pellanon as their home and Persephone as their patron goddess. In Pellanon they hold elections for their high kings. Due to various disputes, a portion of their race has converted to Pyromania and another portion was corrupted by Charnel.

The most prominent Gnomes known are the brothers Thestor and Faestus, renown chieftain and inventor, respectively.

Gnomes are armed with cannons that instantly hit rather than launching a projectile that takes time to impact. Assuming the accuracy doesn't fail the gnome, it is impossible to dodge their attacks. 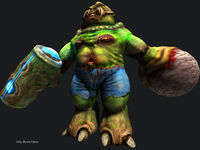 Rendered model of a Gnome 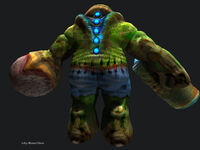 Rendered model of a Gnome
Community content is available under CC-BY-SA unless otherwise noted.
Advertisement