Edit
watch 01:36
We're Getting Mutants in the MCU - The Loop
Do you like this video?
Play Sound
"If you’ve ever heard a real good sculptor speak, he’ll tell you the statue’s already in the stone. All he’s gotta do is chop away the parts that aren’t it. That’s pretty much how it is with Gargoyles. Sometimes, a rock don’t care that it’s made o’ stone: it’s just gotta fly. Well, as I said before, I’m not one to judge a body’s dream. More power to ‘em I say. But it’s hard work for a rock to learn to fly, so if you meet one, don’t be surprise if it’s a bit of a crusty curmudgeon, if you take my meaning. And once they’ve learned to go flitting about regular like, they want to stay airborne as much as possible. So even though they’ve got some mean-looking teeth, don’t expect them to go biting anybody. No, they prefer to stay aloft and spray down a shower of stones. Whatever works, I say." – The Manual, The Book of James

"Able to rain down a shower of stones, Gargoyles can torment whole masses of ground troops. Look out for enemy ranged attackers though." – Zyzyx, The Gods Themselves (James)

The creature is obtained along with Trogg, Earthfling and Rock and in campaign is received in James' first mission.

Gargoyles are named after statues used primarily in Gothic architecture.

Gargoyles are a race of intelligent stone avians brought to life. Being made of earthly materials, they are traditional followers of James.

Passive Abilities: Rock attacks from the air do area damage. 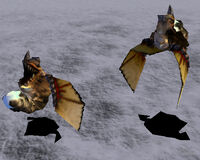 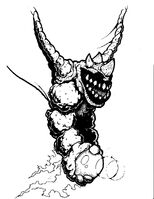 Concept art of a Gargoyle 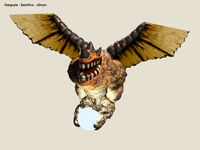 Rendered model of a Gargoyle 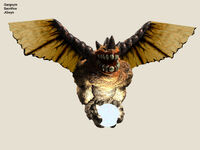 Rendered model of a Gargoyle
Community content is available under CC-BY-SA unless otherwise noted.
Advertisement