Edit
"In the first days, the Frostwolves were slaves to Persephone’s "circles of life." They were simple predators, swift of foot and sharp of fang, traveling in small packs. Always in a desperate search for sustenance. Always in fear of the great mountain Yeti. Helplessly subject to the cruel vicissitudes of ecological cycles. Had it been up to the Goddess, they would never have arisen from this pitiful state of barbarity, but I intervened. I taught them to use their minds and free themselves of primitive superstitions. Their unmatched swiftness is still their greatest asset, but—having learned the fashioning and wielding of knives—they are quite deadly as well." – The Manual, The Book of Stratos

"Frostwolves are the fastest creatures around normally and they can give themselves a boost to sprint even faster for a time. They’re not all that tough, however, so to use them effectively you’ll want to find ways to take advantage of their speed." – Zyzyx, The Gods Themselves (Stratos)

The creature is obtained along with Sylph, Brainiac and Lightning and in campaign is received in Stratos' first mission.

Jon Gwyn, a character modeler for Sacrifice, called Frostwolf to be one of his favorite creatures.

Frostwolf's name is derived from the word "frost-" and "-wolf", amply describing its characteristics. The plural is frostwolves. Although all frostwolves have female voices, it is unknown whether this applies to the entire species.

Frostwolves were an autarkic, nomadic humanoid race known for their unmatched speed, possibly originating from Persephone's realm of Elysium, with yetis as their natural predators. After Stratos took them in their fold, their culture thrived, superstitions were no longer acknowledged, they started using simple tools and eventually grew out of their previous state of semi-existence and nigh-destruction. They are now traditional followers of Stratos and, since no home for them is specified, are presumed to be spread out across Empyrea.

Special Ability: Run Away--Not to be confused with retreating! This ability speeds up your Frostwolves to an alarming rate.

In Multiplayer games, the Frostwolf is a great creature for early in the game, and in general. Having already very quick movement speed, they can be sped up much more with their Special Ability, without draining your wizards mana. Frostwolves are effective in groups of three to five at the beginning of a game.

The Frostwolf is perfectly capable of defending herself early game, her quick speed along with good micromanagement can be very destructive. Level 1 flyers, who are usually effective against melee creatures, will be less effective, as the short range of the Gargoyles and Spitfires can be easily avoided by the swift creatures. The projectile attacks of Shrikes and Brainiacs are also easily eluded, but when knocked over, the Frostwolf can easily be knocked over again.

A group of Frostwolves can be used to rush an unguarded manalith easily. Their quick movement speed allows them to traverse large portions of the map, and strike where an enemy doesn't expect them in a short amount of time. However, later game, this usually isn't a great idea, especially if the enemy has a large army, or massed flying creatures, or creatures guardianed to the manalith. As for wrecking manaliths,  it's usually more beneficial to summon Storm Giants and cast speed up on them, as they have higher damage output and are more resilient, as well as their useful Call Lightning ability. You can always destroy manaliths with ranged creatures or flying ones, but melee units will usually get the job done quicker.

You can also trick the enemy, sending a bunch of Frostwolves to attack a group of enemies, and then using their Speed ability to rush them out of combat before the Frostwolves can take any significant damage. This can be used as a strategy to buy some time, or distract the enemy.

Early in the game, when the opposing Wizard still has little defenses and a small army, it can be quite effective to pin them down with Frostwolves before they can can do much.

Frostwolves are effective against all ranged units. They are the fastest moving melee unit in the game and are very small. This makes them very hard to hit with any projectile. As most ranged units have a weakness to melee damage they are useful at eliminating level 1 ranged units, bugs, snipers and artillery units. 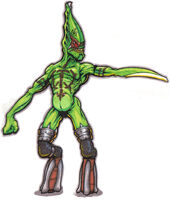 Concept art of a Frostwolf 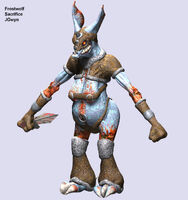 Rendered model of a Frostwolf
Community content is available under CC-BY-SA unless otherwise noted.
Advertisement