Edit
"It’s a cruel world out there. Rarely does one see creatures of different species in close cooperation. (I am not talking about those graft jobs Pyro does, either.) But it is a beautiful thing when it happens. What we call a Flurry is actually two creatures: an apprentice elementalist riding atop a cerulean lummox.
The lummox, of course, is a lumbering but docile mountain creature whose only defense is tossing things with its adept prehensile tail. To give them something better to toss, the young elementalists are taught the transmutation of ice into Storm Crystals, which create a powerful vacuum upon impact—a damaging implosion, instead of an explosion. Though not terribly accurate, the Flurry can rain down a devastating barrage of storm crystals from a great distance." – The Manual, The Book of Stratos

"Flurries aren't too accurate, but those storm crystals they toss draw things in on impact." – Zyzyx, Desperate Measures (Stratos)

The creature is obtained along with Frozen Ground and in campaign is received in Stratos' sixth mission. It shares its unit model with Flummox and Bombard.

Flurry is named after a meteorological phenomenon.

Flurries are a sub-species of the lummox, enthralled by Stratos.

While not as excellent at interruptions as some of the other creatures, the Flurry's crystal implosions can send a wizard flying, potentially interrupting the spell casting. 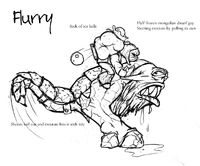 Concept art of a Flurry 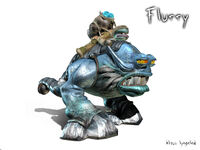 Rendered model of a Flurry 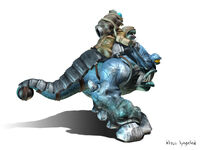 Rendered model of a Flurry
Community content is available under CC-BY-SA unless otherwise noted.