Edit
"Flummox, of course, is just what we call a battle-trained lummox here in the Glebe. I mean, I seen the usefulness of the mountain lummox, same as Stratos and Pyro, but here’s the difference: I didn’t see no need to get all fancy like they done. No, I let mine stick to flinging rocks. It don’t sound like much, but I think it’s often best just to let folks stick with what comes natural to ‘em. Believe me, they’re a lot happier than their counterparts in Pyroborea and Empyrea." – The Manual, The Book of James

"A Flummox isn't too accurate, but even a near miss with those rocks can shake your enemies up." – Zyzyx, Shadow of the Past (James)

The creature is obtained along with Erupt and in campaign is received in James' fourth mission. It shares its unit model with Flurry and Bombard.

Flummox' name comes from the word lummox, which usually designates a stupid or a clumsy person.

The Flummoxes are a sub-species of the lummox. The letter F is added if the lummox in question has been battle trained.

The Flummox is an early artillery unit replacing the regular sniper-slot. While having an artillery ready early on can be handy in ground battles - especially due to splash damage and the stun effect - you should keep in mind that the low accuracy and projectile speed makes it easy for flying units to avoid getting hit and swarm the slow and vulnerable Flummox. Same goes for fast melees that can charge your units in between attacks, so make sure you can keep your Flummoxes safe before investing a lot souls into them.

Passive Abilities: Rock attacks cause earth tremors around the target. All units in the area are temporarily stunned. Low accuracy.

This artillery unit is obtained earlier than its counterparts. Use this to your advantage by taking on your opponents at range before they can engage you. Supplement this position with Taurocks or other brawlers to keep your enemies at bay. 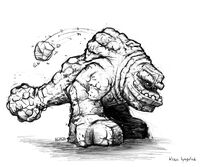 Concept art of a Flummox 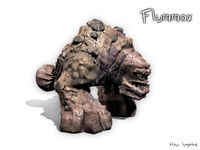 Rendered model of a Flummox 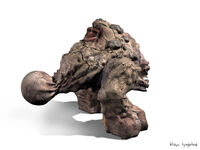 Rendered model of a Flummox
Community content is available under CC-BY-SA unless otherwise noted.
Advertisement