Edit
"The Fallen are, how do you say, corrupted versions of beings first formed by that simpleton James. They possess only a skeletal frame and rotting flesh, but this in turn attracts swarms of insects, which they can then send forth to attack their foes. Beautifully conceived efficiency, if I do say so myself. Further, the Fallen may adopt the form of a corpse, and while in this guise, restore lost health. Quite ironic, wouldn't you agree?" – The Manual, The Book of Charnel

"The fleet-footed Fallen can send out a stream of those insects that are always buzzing about them, which is particularly useful against flying enemies. Oh, and they are very good at playing dead which allows them to heal themselves." – Zyzyx, The Gods Themselves (Charnel)

The creature is obtained along with Scythe, Locust and Insect Swarm and in campaign is received in Charnel's first mission. It shares its unit model with Earthfling and Flame Minion.

Etymology of Fallen's name is obvious and not very complex. Plural of Fallen is also Fallen. Despite being called "Fallen", Fallen are not dead, but are in fact corrupted.

Fallen are a sub-species of the Earthflings, created by Charnel. They come from one of Charnel's sources for his minions – the corrupted. They were specifically used by Charnel to drive away a Dragon and to eventually free Charnel's disgraced champion.

The fallen is the only Charnel unit to heal naturally without having to harm an enemy creature. You prepare ambushes for enemy units by hiding the Fallen with their special ability. 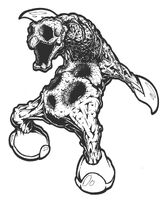 Concept art of a Fallen 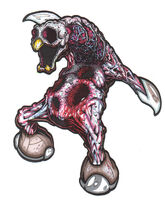 Colored concept art of a Fallen 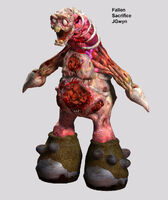 Rendered model of a Fallen
Community content is available under CC-BY-SA unless otherwise noted.