Edit
"In the Elder Days, the Earthflings arose from the spirit of the soil. Rocky, grainy, sandy, soft. A little bit of everything went into these fellows, and they haven’t forgotten it. As the Earthflings say, "You’ve gotta know where you come from to know where you’re going." So they can draw soil up from the ground they’re standing on and send it a-flying outta their mouths, but that ain’t all. They can change their whole bodies into one big rock what’s nigh invulnerable. That’s staying in touch with your roots, that is." – The Manual, The Book of James

"Able to launch out a cluster of rocks, the Earthfling is great at taking down enemy flyers. Of course, they’re not tough enough to stand in against melee attackers, but when in trouble, they can revert to their nearly invulnerable Rock form and heal up." – Zyzyx, The Gods Themselves (James)

The creature is obtained along with Trogg, Gargoyle and Rock and in campaign is received in James' first mission. It shares its unit model with Flame Minion and Fallen.

Earthfling's name is derived from the word "earth-" and "-fling", amply describing its characteristics.

Earthflings are a humanoid race created from the spirit of the earth. They have a great bond with the earth and as such are traditional followers of James. However there are still those who were corrupted or traded with other gods.

Special Ability: Turns an Earthfling into a large boulder, making it nearly immune to damage.

Concept art of an Earthfling 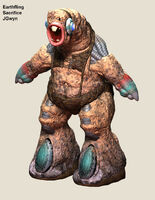 Rendered model of an Earthfling
Community content is available under CC-BY-SA unless otherwise noted.
Advertisement