Edit
"In time of peace, Druids perform many sacred roles in Fyllid society, from the tending of sacred groves to the keeping of lore. In time of war, they form the heart of Our fighting force. Druids wield no weapons other than their fists, but can use words of protection to create a shield around themselves, protecting them from harm." – The Manual, The Book of Persephone

"Druids are true holy warriors. They are not as powerful as some of their foes, but they make up for it with their ability to create a mystical Life Shield around themselves." – Zyzyx, The Gods Themselves (Persephone)

They are obtained along with Ranger, Shrike and Wrath and in the campaign are first available in Persephone's first mission.

Druids are named after a clerical class in the society of the old Celts.

Along with rangers, druids belong to a race of people known as the Fyllid, whose home is in the Daven Forest. They are traditional followers of Persephone, and before her that of the Creator. They played one of the most prominent roles in the history of the world of Sacrifice, before Eldred's arrival.

The most prominent druid known is Athelas. 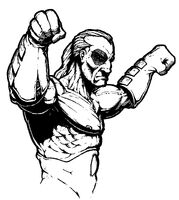 Concept art of a Druid 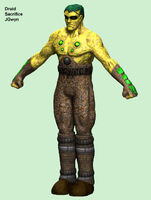 Rendered model of a Druid
Community content is available under CC-BY-SA unless otherwise noted.
Advertisement