"Dragons are celebrated in the lore and legends of this world and many others. They are revered. They are worshipped. They are feared. What rubbish! Dragons get hungry. Dragons get greedy. Dragons die. What you really want is the dragon’s fire. Who cares about the lizard? A good sorcerer can summon Dragonfire with no snake at all and use it to smite several foes, one after the other." – The Manual, The Book of Pyro

"A flying dragon of pure fire is summoned forth, that strikes a number of targets before burning itself out." – The Manual, The Book of Pyro

The spell is obtained along with Pyromaniac and in campaign is received in Pyro's 4th mission.

Dragonfire is a spell that summons a dragon of fire that flies towards, and causes damage to, 5 random enemies. 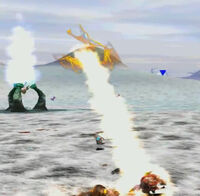