Dragon is one of the most powerful units in the game. Like all level 9 creatures, it is a Titan, and like all Titans, it shares resistances, amount of mana, accuracy, mana cost and soul cost with them. For a Titan it has an average speed and above-average health, damage and attack speed, being the only melee attacking Titan.

The creature is received in campaign in Persephone's ninth mission. It has no entry in the manual nor is a description of it given in-game.

Dragons are obviously named after the mythological reptiles.

The most prominent Dragon known is the dragon matriarch Sirocco. While the hierarchy of their culture is unknown, as well as Sirocco's position in it, she most certainly has a strong influence on the rest of her race. As all dragons beside her have male voices, it is possible she is one of rare females and acts as a "queen" to their "swarm".

While dragons have no specific place they call home, they have been known to nest in the Glebe, far from Persephone's native lands of Elysium. Particularly, in Solis where a dragon boneyard stands and in Quorog where the Dragons have had a long tradition of using the local caves as breeding grounds in which Dragon Hatchlings would shelter and an older Dragon would watch over them. During the time of Sirocco's madness caused by the Ragman, a conflict between James and Persephone broke out after the Dragon Hatchlings began killing and terrorizing the local fungus farmers. After the threat was forcefully subdued by the Yeomen of the Glebe, Persephone proclaimed the destruction of dragon breeding grounds and possible slaughter of the Hatchlings to have been justified.

Dragons have impressive health and resistances, making them the toughest creatures in Persephone's armies and second only to Rhinok in contest for being the hardest-to-kill creature in the game. Despite their bulky appearance, Dragons are quite fast, especially when flying (they move twice as fast when they are in the air). They are the only melee level 9 creature, which makes them something of a vastly empowered Bomber. Like all flying melee creatures, their attack rate is about twice as fast when they are on the ground rather than in the air, but also considerably less potent, evening up the damage done over time by both these attacks.

Although lacking bombers' manually-activated harassing abilities, they possess a passive asset of binding enemies in place with their already powerful attacks, should a creature survive them.

Dragons also have a very useful special ability. As the servants of Persephone, the goddess of life among other things, Dragons are far from being fire-breathing wicked lizards, as represented in most modern images (although Pyro, in his book, suggests they can breathe fire and that fire collected). Dragons' breath, instead of causing harm, brings the fallen creatures back to life (effectively mimicking Charnel's Animate Dead spell). Wise usage of this ability, combined with overall Persephone healing spells, can prove to be a tactic more than difficult to match.

The melee attacks are arguably the best tool at Dragons' disposal, as they prove to be the hardest-hitting creatures in Sacrifice. It takes only two such attacks to kill a wizard (regardless of the level and most of the protective spells) or destroy an unguardianed Manalith. Although the attack animation is quite long, it is worth mentioning that there is no way of escaping its damage - once the animation started, the target can only wait for the impact, even after speeding-up or teleporting away. The sheer force of their blow disrupts most creatures (and wizards), causing any spells being cast by a wizard to instantly fail. As mentioned earlier, each time the Dragon hits a ground creature, it immediately casts a Grasping Vines spell on its target at no mana cost. Shielded wizards can avoid being grasped, but even they are stopped for a moment because of the powerful impact. Because of their destructive attacks, Dragons can beat any other creature in a one-on-one combat, including other Titans.

The true trick, however, is to effectively make the best use of Dragons' melee attacks. The attack animation is relatively long (and as such can be countered with timed Freeze or Slime spells), so players should make sure that these attacks count. It also takes some time for a Dragon to approach its target (such as lowering its flight), so sending Dragons in groups larger than two for a smaller target - such as enemy wizard - is a risky maneuver, as they will be likely to get in each other's way and not attack at all. 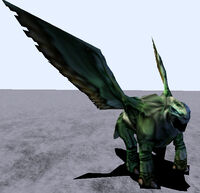 Picture of a Dragon

Concept art of a Dragon 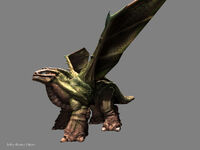 Rendered model of a Dragon 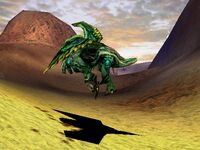 Sirocco, the mother of all Dragons 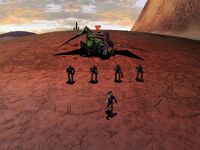 The Dragon in charge of defending the Dragon Hatchlings, slain
Community content is available under CC-BY-SA unless otherwise noted.
Advertisement