Edit
watch 01:36
We're Getting Mutants in the MCU - The Loop
Do you like this video?
Play Sound
"Ever since Persephone brought those pesky Gnomes, with their incessant tinkering and generally meddlesome disposition, into this world, I have known that with the proper inducement they would make fine servants of slaughter and mayhem. Only recently have my efforts in this regard succeeded in producing the Deadeyes. Like their cowardly, living cousins, Deadeyes prefer combat at a distance. To this end, they developed an extremely accurate weapon capable of firing a highly lethal poisonous needle, which not only does damage but debilitates its victim as well. These weapons are slow to fire and no replacement for massed of the Fallen, but you will find the use of a few of them highly efficacious." – The Manual, The Book of Charnel

"Like the gnomes that they come from, these Deadeyes are good at attacking from a distance. And the darts they shoot, poisonous." – Zyzyx, Allegiance (Charnel)

The creature is obtained along with Demonic Rift and in campaign is received in Charnel's fifth mission. It shares its unit model with Gnome and Pyromaniac.

Deadeye is named after after the slang term which means a very accurate shot. This is also a pun, as Charnel has an obsession with death.

Deadeyes are a sub-species of the Gnomes, corrupted by Charnel to become his Minions.

While not a Deadeye himself, for a brief time Thestor lead a contingent of the Minions in his bid for power, presumed to be turned into a Deadeye should he had been successful, as Charnel showed little concern over his fate.

A couple of Deadeyes can be very devastating, especially while focused on an enemy wizard - due to the poison causing damage over time, and the prevention of mana and health regeneration.

They work great as guardians, due to significant boost of their poisonous attacks' damage, which also means they recover health more easily.

Deadeye's range is much larger than most other sniper units, , rivaled only by Boulderdashes 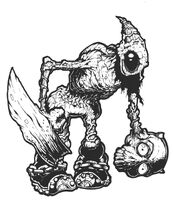 Concept art of a Deadeye 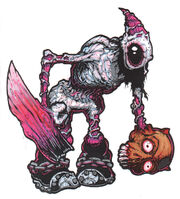 Colored concept art of a Deadeye

Transparent concept art of a Deadeye 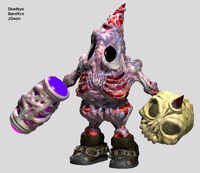 Rendered model of a Deadeye
Community content is available under CC-BY-SA unless otherwise noted.
Advertisement