Edit
"The lowliest of my slaves is the mindless Cog. Unfortunately, its heat energy is entirely used up in powering its deadly spinning bludgeons; so it is one of the few proles that does not burn its victims. That is, up until it is destroyed. You use them as fodder and then, whenever your enemies destroy one, it erupts in a searing steam blast, scalding anything near it." – The Manual, The Book of Pyro

"Cogs are pretty good at bludgeoning people with those steam driven hammers of theirs. Stay clear when they burst though; that steam is pretty hot!" – Zyzyx, The Gods Themselves (Pyro)

The creature is obtained along with Flame Minion, Spitfire and Fireball and in campaign is received in Pyro's first mission. It shares its unit model with Scythe.

Cogs are named after the teeth on the rim of a gearwheel, describing their nature of attack.

Not much is known about Cogs, except for the mechanical, steam-driven construction of their bodies and the origin of their creation – Pyro's factories. While they are exclusively Proles, and as such Pyro's slaves, it is uncertain if actual slaves are used to power their internal mechanisms, although because of the size of cog's eyes this seems implausible. Since they have no specified home, they are presumed to be spread out all over Pyroborea.

Passive Abilities: Overheat-- Upon its death, it releases steam, causing area damage to all nearby creatures.

The Cog might deal a little damage with it's attacks, but it deals quite some damage when it dies. 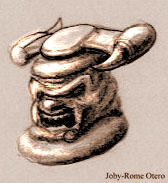 Concept art of a Cog, possibly used later to create the Scythe 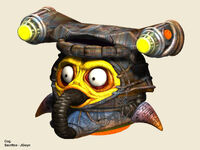 Rendered model of a Cog
Community content is available under CC-BY-SA unless otherwise noted.