Edit
"When unencumbered by the artificial constraints of the body, the power of the mind is an amazing thing. Though the Brainiac does (technically speaking) possess a body, it is of far less substance (if you will) than his mind. Using his modest wings to keep him aloft and out of the fray, a Brainiac focuses his mental energies against an opponent in an irresistible psychic attack. In addition to traumatizing the subject so thoroughly that it physically suffers all the damage it imagines, this attack will often briefly debilitate the subject, causing it to fall to the ground helpless. Sheer genius." – The Manual, The Book of Stratos

"Brainiacs think they are the smartest creatures around. Always prattling on about knocking people down with only the “Power of their minds.” Oh please. Well their minds may be powerful, but the fact is their bodies are quite frail." – Zyzyx, The Gods Themselves (Stratos)

The creature is obtained along with Frostwolf, Sylph and Lightning and in campaign is received in Stratos' first mission.

Brainiac's name is a pun on Brainiac's cognitive abilities.

Brainiac's name is a combination between "brain" and "maniac"

Brainiacs are a race of extremely intelligent avians, known for their telekinetic abilities and frailly constructed bodies. Due to their high intelligence, they embraced Stratos as their traditional god.

The most prominent and the most intelligent Brainiac known is Sara Bella.

Passive Abilities: Knocks enemies down by the use of psychokinesis, causing a target to be stunned as well as wounded.

Brainiacs are perfect for interrupting an enemy wizard's spell casting.

In multiplayer games, on your first couple of levels, Brainiacs can greatly hinder enemy melee units, with their good attack rate, and in larger numbers, they can severely slow down and pin down an oncoming enemy force, while stunning the enemy wizard and his units. This can allow your other units a large window of attack, and allow slower and more powerful units, to get up close.

However, the Brainiac is very fragile, and its attacks do little damage. Later in the game, as you and the enemy wizard gain levels, other units that are good at stunning enemies become available. (However, the brainiac can fly and is quick, and its low soul cost make it better in certain situations.)  Chain Spells such as Halo Of Earth, Chain Lightning, and DragonFire will easily destroy most Brainiac formations. Even a well placed Basic Attack spell in a cluster of Brainiacs will often destroy them all. Avoid using tight formations with Braniacs, especially Phalanx formation. 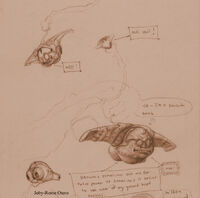 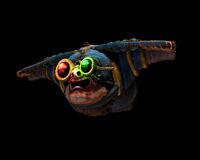 Early rendered model of a Brainiac 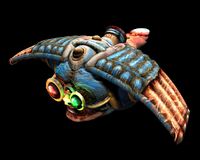 Early rendered model of a Brainiac
Community content is available under CC-BY-SA unless otherwise noted.