Edit
"In the badlands, prey is scarce, but rocks aren’t too hard to come by. The Boulderdash is one badlands predator what’s learned to make the most of its surroundings. As you might expect, it can shoot out these rocks, and the things hit hard enough to kill lots of critters outright. Smack! Just like that. But that ain’t all. A Boulderdash shoots out three rocks at a time in a narrow spread. Yeah, they’ve even got a little saying about it: "Two birds with one stone is good fortune, but three stones with one shot is good tactics." Not exactly poetry, but it gets the point across. Same goes for the Boulderdash." – The Manual, The Book of James

"The Boulderdash is such a good shot, he can hit more than one opponent at a time." – Zyzyx, Desperate Measures (James)

The creature is obtained along with Wall of Spikes and in campaign is received in James' sixth mission. It shares its unit model with Squall and Fire Ballman.

Boulderdash is most likely a pun on the term balderdash, but could also be a reference to the Boulder Dash video game series.

Passive Abilities: Boulderdash shot splits into three parts, making it possible to hit multiple enemies at once. (Or to do triple damage to one large target.)

These creatures will come to replace your Flummoxes in time, as they are more accurate and better at dishing out the damage, rather than simply knocking enemies to the ground. This creatures really make James' armies unstoppable machines of warfare, though since they are such a high level you must survive to that point. But then it's all yours.

They work well against enemy titans, as they easily can hit them with all 3 projectiles, dealing massive damage over large range. Boulderdash's range is much larger than most other sniper units, rivaled only by Deadeye 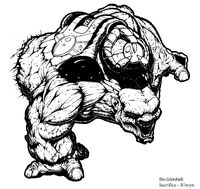 Concept art of a Boulderdash 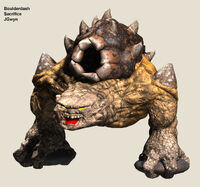 Rendered model of a Boulderdash
Community content is available under CC-BY-SA unless otherwise noted.