Edit
"Maybe you’ve seen a lummox before? Big, slow, not too bright, but they can carry a large load and are pretty good at throwing things with their tails. Stratos has some throwing imploding "storm crystals" and calls them Flurries. And he claims to be smart. Ha! I fixed mine to toss bombs. True, these Bombards, as I call them, are none too accurate but that hardly matters when the explosions start. Explosions beat implosions any day in my book." – The Manual, The Book of Pyro

"These Bombards are slow, but they can deliver highly explosive charges from a great distance." – Zyzyx, Desperate Measures (Pyro)

The creature is obtained along with Firewall and in campaign is received in Pyro's sixth mission. It shares its unit model with Flummox and Flurry.

Bombard's name is derived either from the word bomb or bombardier.

Bombards are a sub-species of the lummox, enslaved by Pyro.

Passive Abilities: Sets targets alight over a wide area, causing burn damage as long as they are aflame. 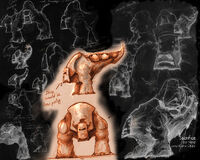 Concept art of a Bombard 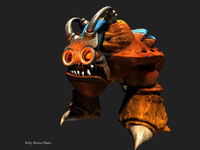 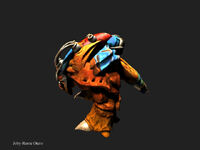 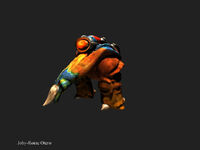 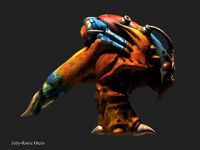 Rendered model of a Bombard
Community content is available under CC-BY-SA unless otherwise noted.