"No one would ever accuse Ambassador Buta there of being very smart, but he's powerful.
Watch out for his fireball-dragon fire combo." – Zyzyx, first time Buta is encountered

Ambassador Buta (also known as just Buta) is Pyroborea's only known ambassador. A powerful, but unintelligent wizard, he serves Pyro as one of his champions. Out of the several wizards that have served Pyro, he is without a doubt most loyal and most ruthless of them. Due to Sorcha's fading devotion to Pyro's cause, he was even in charge of guarding Pyro's ultimate altar in Helios on almost every single occasion.

Buta was either born in Sere or had chosen the land as his home. Simple-minded, but also an expert in Sorcery, he rose to the rank of an ambassador in Pyro's employ. He even attempted to advance himself further by trying to woo the then-current reigning empress of Pyroborea, but to no avail.

The War and the Siege of Cindercrag[]

Buta was inactive until the war with Persephone and Stratos started. The war made Pyro put him in action quite often. His first known act was assisting Faestus in pacification of Urghaz and the subsequent creation of the Firefists. The greatest among his diplomatic successes of the period was negotiating an alliance with Charnel during an attack of his home by both Charnel's forces and the united armies of Stratos and Persephone. After that his actions were more of a military nature than those of diplomacy, like his defense of both Magmar and Sere or his assault on Surtur's Keep. Later in the war he either defended the Pyrodraulic Dynamo™ or the fortress of Ash, depending on his enemy's tactics.

Aftermath of the Battle and the War[]

The rest of his story depends on which god the player continued the campaign with. If the player continued with either James, Stratos or Charnel, the battle of Cindercrag was lost either to the Yeomen or, if they lost, to the Minions that came to Charlotte's rescue, breaking Charnel's alliance with Pyro. In that battle Buta was defeated alongside other Pyro's champions, after which he retreated to Helios, capital of Pyroborea, where he was eventually defeated again.

If the player continued to serve Persephone, Buta was among the wizards ordered to destroy Eldred upon his invitation to Helios by Pyro for "negotiations". There, despite being overwhelmed, Eldred defeated both of Pyro's wizards, including Buta.

If the player continued to serve Pyro until both Persephone and James were destroyed, Buta either helped Eldred destroy Stratos by leading an all-out assault on Empyrea in order for Eldred and Sorcha to assault Stratos' home of Thryhring or he died assisting Eldred (who was under orders from Stratos) to destroy Charnel, when Marduk himself destroyed Pyro.

His fate, after the game, is positive only if the campaign is finished with Pyro. If the player had Eldred decline Pyro's offer to become the new Emperor, Buta is presumed to have taken that role due to the lack of a better candidate. If, however, the offer was accepted it is uncertain if he resumed to hold onto his title as the ambassador due to Pyroborea being the only remaining realm and thus no longer having anyone to negotiate with or if he was even sidelined by Eldred.

If the game was finished with any other god he is presumed to have died alongside Sorcha as Pyro's defeated champion during the invasion on Helios, unless the player finished with Stratos, but played most of the campaign with Pyro, where Buta was killed in front of Eldred when his link to Pyro was severed by Pyro's destruction by Marduk.

Buta's name may come from the Hungarian word "buta" which means "stupid", fitting him very well.

Only exceptions to these are Charnel's third mission in which he receives a bonus 50% to his mana and James' fifth and sixth missions when he receives an additional Dragonfire alongside the one he already has from being a Pyro's wizard. It is uncertain if he actually uses both spells.

His color in every mission is always yellow, representing his patron god, Pyro. 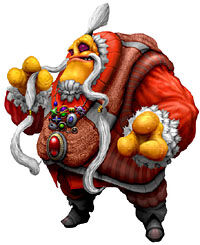