Edit
"Not even I can tell you the origin of Abominations, but it is clear they are a perversion of nature far beyond any need for improvement by myself. Tall and gruesome, the Abomination reaches into its own body, pulling forth a quivering mass of corrosive blood and intestine (I think) for use in long-range bombardment. It is no wonder they are not very accurate, but that is of little consequence. Their projectiles splatter on impact, affecting a wide area and, while in the air, trail deadly drippings of corrosive blood. It's poetry, I tell you." – The Manual, The Book of Charnel

"Abominations are very nasty. Their projectiles do a lot of damage at long range and anything under their path is also hit." – Zyzyx, Desperate Measures (Charnel)

The creature is obtained along with Wailing Wall and in campaign is received in Charnel's sixth mission. It shares its unit model with Mutant.

Abominations are a race of intelligent beings with unclear heritage. Although similar in appearance to Mutants, the two have no connections whatsoever. They fall into the category of Charnel's pestilent Minions.

Passive Abilities: Regenerates life when attacking. Thrown blood and intestine damages all enemies between itself and the assigned target. When its thrown intestines strike the final target, all enemy units in the surrounding area will take damage. 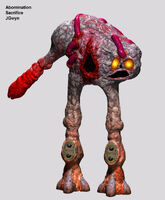 Rendered model of an Abomination
Community content is available under CC-BY-SA unless otherwise noted.
Advertisement